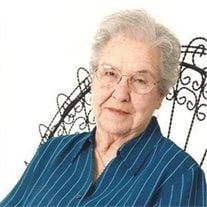 Ruth Geraldine Jamison was born to John Orville and Ida Josephine (Davis) Jamison in Todd County, South Dakota on October 27, 1920. She was the eleventh child born to this union. When she was 4 months old the family moved to Keya Paha County, Nebraska. Those childhood years on the Dyer ranch were enjoyable and she spent her lifetime telling her children and grandchildren about all of their adventures and misadventures. Ruth attended rural schools in Keya Paha County and then two years of high school at Burton. She and her sister Vivian graduated from Keya Paha County High School together in 1939. Vivian passed away that fall and then Ruth got her teaching certificate and taught for a few years. On May 4, 1944, she and Corp. Glen Hallock were united in marriage at the Methodist Church parsonage in Springview, Nebraska. Following Glen's discharge from the Army Glen, Ruth and their new baby Connie, moved the Frank Tisue ranch. While living there Sue, Betty, Ernest and Steve joined the family. Ruth always did lots of canning, raised chickens and sewed most of the dresses for the girls. She worked in the hayfield with Glen while the family spent their time a safe distance away in the shade of the car playing with the dolls or the toy tractors. She was an Extension Club member, serving as County Chair and heading several community service projects. Ruth was instrumental in organizing the local American Legion Junior Auxiliary. Glen and Ruth joined the Methodist Church in 1954 and she remained an active member in the church as well as the UMW all those years. She has been a member of the American Legion Auxiliary for 58 years. In 1965 they open Ruth's Café in Springview. It remained the place to have the best warm cinnamon rolls and homemade pies for 18 years. It was also the gathering place for all the community coffee drinkers. During the café years and following her retirement she took a real interest in making ceramics and also developed a great love of quilting and especially enjoyed the afternoons with the Methodist quilters. She and Glen were instrumental in organizing and maintaining the Senior Center, and for years she was one of the regulars who prepared the meat and the dinner rolls for the Sunday dinners. They loved to play cards at a party, at the Center, or at home with friends, children or grandchildren. There was always a deck of cards close as well as coffee, cookies and conversation. Following their retirement they spent many hours on the benches watching the grandchildren's activities. Ruth was always there to help shuttle vehicles and equipment for the boys and always opened her home when the grandchildren needed to shower, change clothes or something to eat. She willingly opened her home to those stranded in a sudden snow storm and fed them breakfast the next morning. One of the last joys she looked forward to was having morning coffee at Flynn's or at the Center. Ruth passed away on July 21, 2013 at the Parkside Manor in Stuart, Nebraska. She was preceded in death by her husband Glen; parents, John and Ida Jamison; her brothers, Price, John, O.D. (Tim), Donald, Gerald, William and Vernon; sisters, Naomi McConnell, Ruby Shepperd, Josephine Snider and Vivian Jamison, along with one great-grandson, Grayson Hallock. Ruth is survived by her children Connie (Gale) Larrington, Sue (Ben) Weston, of Springview, Betty Chrans of Bassett, Nebraska, Ernest (Karen) Hallock and Steve (Chris) Hallock of Springview. Also surviving are her sister Margaret "Peg" Carlson of Bassett, and sisters-in-law, Maxine Jamison of Springview and Ann Jamison of O'Neill, Nebraska; grandchildren, great-grandchildren, and great-great-grandchildren as well as nieces nephews and a host of friends. Funeral services were held on July 25 at the United Methodist Church in Springview, Nebraska with Pastor Rod Heilbrun officiating over the service. Joan Swim provided the music and also sang "Precious Lord, Take My Hand." A special song selection of "I'll Fly Away" was also provided by Ruth's Great-Grandchildren. Brian Larrington read the obituary and Ryan Weston shared "special memories" of Grandma Ruth by the grandchildren. Pallbearers were, Michael Weston, Ryan Weston, Brent Weston, Darrin Larrington, Brian Larrington, Eric Chrans, Jason Chrans, Daniel Hallock, Scott Hallock, Keith Hallock and Shawn Fernau. Honorary bearers were, all of Ruth's granddaughters. Interment was held at the Mt. Hope Cemetery in Springview, Nebraska under the direction of Hoch Funeral Home of Ainsworth.

Ruth Geraldine Jamison was born to John Orville and Ida Josephine (Davis) Jamison in Todd County, South Dakota on October 27, 1920. She was the eleventh child born to this union. When she was 4 months old the family moved to Keya Paha County,... View Obituary & Service Information

The family of Mrs. Ruth G. (Jamison) Hallock created this Life Tributes page to make it easy to share your memories.