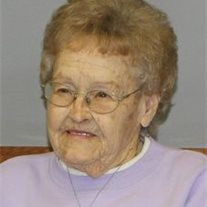 Ruth M. (Beutner) Lutz was born on January 17, 1929 to Viola (Minor) and Gustav Beutner at White Lake South Dakota. She passed away on June 19, 2016 at the Good Samaritan Hospital in Kearney Nebraska at the age of 87. Ruth spent her early years in White Lake and met her husband Tom from Plankinton South Dakota. They loved to dance and would find a dance somewhere seven nights a week. She married her dance partner and love of her life on June 9, 1947. Tom and Ruth moved a lot during there early married years. In 1961, they moved to Long Pine, Nebraska to raise their children and make a home there. Ruth had several jobs through out her life, from owning a business, working at McCains, and the Bassett Country Club, but her best job was as a wife, mother and friend. Ruth had a lot of patience raising seven children and the mischief, accidents and trouble that came along with them. She never forgot birthdays, anniversaries and when one of her kids were going through life's bumps, she was there to lend an ear, give advise or cry right along with you. She had a kind heart and always thought of others before herself. Most of all, she believed that God was helping her through it all. She loved a good card game, road trips, spending time at the creek and having family and friends around. She was one of a kind, no one will replace her. Ruth is preceded in death by her parents, Gustav and Viola Beutner; Stepfather, Paul Hose; brother, True Beutner; sister, Audrey Zwirpel; step-brother, Norton Hose; daughter-in-law: Arlou Lutz. Left to cherish her memories are her husband; Tom of 67 years; seven children, Mike and Laura Lutz of North Platte, Nebraska, Jackie and Dan Nagy of Long Pine, Kathy Johnson of Tucson Arizona, Joel and Jude Lutz of Bassett, Diana Shaul and fiancé Mike Dickhausen of Brighton Colorado, Bobbi and Bryan Coleman of Bassett and Sherri VanDiest of North Platte. Brother, Eugene Beutner of Hot Springs South Dakota; 19 grandchildren and 27 great-grandchildren, nieces, nephews and friends. Memorial Services were held on Friday, June 24, 2016 at the Zion Lutheran Church in Ainsworth, Nebraska with Pastor Georg Williams officiating the service. Music was provided by Georgia Williams. Music selections of "Old Rugged Cross" and "Amazing Grace" were provided, along with a CD selection of "Sissy's Song" by Alan Jackson. Honorary Bearers were all of Ruth's grandchildren and great-grandchildren. Inurnment followed at the Grandview Cemetery in Long Pine under the direction of Hoch Funeral Home of Ainsworth. In lieu of flowers, memorials were suggested to the Long Pine American Legion Club or to the Sandhill's Cancer Fund Inc.

Ruth M. (Beutner) Lutz was born on January 17, 1929 to Viola (Minor) and Gustav Beutner at White Lake South Dakota. She passed away on June 19, 2016 at the Good Samaritan Hospital in Kearney Nebraska at the age of 87. Ruth spent her early years... View Obituary & Service Information

The family of Mrs. Ruth M. (Beutner) Lutz created this Life Tributes page to make it easy to share your memories.