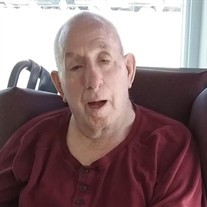 Russell Leon Fox came into this world on September 19, 1931. He was born to parents of Leo Fox and Matie Graham in Kossuth County, Iowa. Russ was the fourth of 10 siblings born to this family. He left this world on November 26, 2018 at the Sandhills Care Center in Ainsworth, Nebraska. His younger years were spent in the north central Iowa area helping his father work for different farmers. Later he went to work for a company located in the town of Algona, Iowa called Universal Mfg. Co., a producer of authorized remanufactured Ford automobile and truck parts. He joined two brothers in working for this company. After working for a number of years with the plant in Algona, he was transferred to the Peoria, Illinois area to work for that same company. He spent some time there and was then asked by the company in the late 60's, to take a position in Ainsworth, Nebraska for a retiring employee, to be a route salesman that went across the state of Nebraska both east and west selling wholesale parts to Ford dealerships. Omaha, Nebraska was the warehouse where he picked up the parts for filling the contents of his truck on an every other week basis. Russ's truck was his home away from home and his "pride and joy!" He loved the socialization with his-dealers and all the people he met as he came and went. He worked for this company until retirement in 2000 after putting in 40 plus years. Russ and Charlene met while Russ was working and living in Ainsworth, and were married in 1984. Russ had a son and daughter from a previous marriage and gained two stepsons when our marriage took place. Russ is preceded in death by his parents, a son, a son-in-law, four brothers, three sisters and a step-grandson. He leaves to mourn his wife Charlene of almost 35 years, a daughter, two stepsons, two sisters, three grandchildren, five step-grandchildren, four great-grandchildren as well as great-great-grandchildren and numerous nieces, nephews and other family members. Cremation has taken place. ***PRIVATE FAMILY GRAVESIDE MEMORIAL SERVICE*** Saturday, September 21, 2019. Pastor Gary Graesser will be officiating the service. In lieu of flowers memorials have been suggested to the family for a future designation.

Russell Leon Fox came into this world on September 19, 1931. He was born to parents of Leo Fox and Matie Graham in Kossuth County, Iowa. Russ was the fourth of 10 siblings born to this family. He left this world on November 26, 2018 at the Sandhills... View Obituary & Service Information

The family of Mr. Russell L. Fox created this Life Tributes page to make it easy to share your memories.