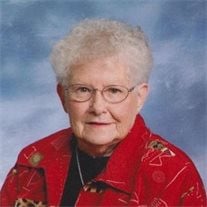 Ruby Ann Waddell passed into the loving arms of her Lord and Savior on the evening of November 23, 2012, surrounded by her family at the Community Pride Care Center in Battle Creek, Nebraska at the age of 82 years. She was born on November 28, 1929 to William "Bill" and Nellie (Vanhoozier) Kinder in Tazewell, Virginia. Ruby grew up in Virginia and lived her entire life there until she married George Waddell on November 20, 1952. They later moved to Nebraska living in the towns of Plainview and Norfolk, and then in Bassett. Ruby and George were blessed with nine children, as well as 17 grandchildren and 29 great-grandchildren. Ruby's faith in the Lord, her family and friends, were the most important things in her life. Nothing could bring a smile to her face more than the grandchildren and great-grandchildren. She loved the Lord very much and was faithful in her church. Ruby was preceded in death by her parents, William and Nellie; husband, George Waddell; daughter and son-in-law, Charlie and Betty Magnussen and granddaughter, Jamie; along with one sister and four brothers. She is survived by her eight children, Jack Waddell of Hot Springs, South Dakota, Jerry Waddell and wife Marie of Dallas, Texas, Mary Hayes and husband Marvin of Nixa, Missouri, LeRoy Waddell and wife Connie of Battle Creek, Nebraska, Darlene Andry of Converse, Texas, Nancy Nast and husband Earl of Niceville, Florida, Laura Tunink and husband Randy of Bassett, Sharon Olson of Orchard, Nebraska; two sisters, Nell Booth and husband Edward of Edgewater, Maryland, and Sally Kinder of Bluefield, Virginia; five brothers, Ernest Kinder and wife Shirley of Bluefield, Virginia, Sam Kinder and wife Connie of Tannersville, Virginia, J.B. Kinder and wife Connie of Abingdon, Virginia, and Rufus Kinder and wife Lois, and Ron Kinder and wife Patsy all of Tannersville, Virginia; and one sister-in-law, Linda Kinder of Tannersville, Virginia. The family would like to thank Lorain Bickham of Bassett and the staff at Community Pride Care Center for all of the years of caring and loving for their mother. Funeral services are to be held on Thursday, November 29, 2012 at the Valley Grove Community Church near Bassett, Nebraska with Pastor Walter Thomack officiating over the service. Music will be provided by Carol Plate and Stanley Larson, with special song selections of "The Old Rugged Cross", "Amazing Grace" and "How Great Thou Art" to be provided. Casket bearers are, Brian Hayes, Adam Hayes, Tyler Tunink, Rodney Olson, Randy Olson, Chris Magnussen, Matt Magnussen, Justin Waddell and David Nast. Honorary bearers are, Lynn Hickman, Dale Ellwanger, and Eldon Sylvester. Interment will be in the Bassett Memorial Park Cemetery in Bassett, Nebraska. Hoch Funeral Home of Bassett is in charge of the arrangements.

Ruby Ann Waddell passed into the loving arms of her Lord and Savior on the evening of November 23, 2012, surrounded by her family at the Community Pride Care Center in Battle Creek, Nebraska at the age of 82 years. She was born on November... View Obituary & Service Information

The family of Ruby Ann (Kinder) Waddell created this Life Tributes page to make it easy to share your memories.

Ruby Ann Waddell passed into the loving arms of her Lord and...