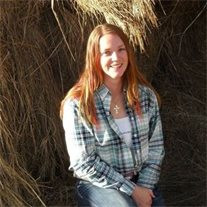 Ronnie Nicole Porter "Pooh Bear" This is not a normal obituary, for it is written for an extraordinary woman. Ronnie Nicole Porter lost her long and courageous battle with cancer, in the early morning hours of Monday April 17, 2017. Ronnie started doing things "her own way" from birth, on July 1, 1981, by arriving on her own time, not on the due date. She continued this theme until her passing, which was also on her time. Ronnie was born to Dwight and Shari Porter in Valentine, Nebraska. She stayed in this area for most of her elementary school. Her middle school and high school days were spent in the Burwell and Taylor, Nebraska area. She graduated from Loup County High School in 1999. In her adult years, she eventually moved back to the Valentine and Ainsworth, Nebraska area. She loved being outdoors, whether it was at night, watching the stars, or sleep walking. She also loved working cattle and the ranch life in general. Ronnie worked in the Health Care Profession for many years as an EMT and a CNA and CMA. She later became a feed truck driver. She was extremely proud of her professions and accomplishments. She was most proud of her three children, Austin, Korah, and Londyn Dunbar. Ronnie is preceded in death by her father Dwight Porter, Grandfather Rich Cozad, Grandmother Marlin Porter, Uncle Skip Porter, and Aunt Kimberly Wagner. She leaves behind three children, Austin, Korah, and Londyn Dunbar all of Ainsworth; Mother and Stepfather, Shari and Ron Dubry of Valentine; Brother, Bryce Porter of Wood Lake; Sister, Chelsea Porter of Valentine; Brothers, Bailey and Devon Porter along with Bailey's fiancé, Desarae Carlett all of Thedford; Step-sister, Ann and Travis Collier of Dunning; Friend, Curtis Reed of Ainsworth; Grandfather, Lawrence and wife Alberta Porter of Neligh, Nebraska; Grandmother, Norma Cozad of Wood Lake; as well as many aunts, uncles, cousins, nieces, and nephews, plus many friends that have become a massive extended family. Poem By: Tony G. Dunbar She was strong of will, And soft of heart, From her kids, she did not want to part, Through life she was tossed many a curve, Most she dodged with a dangerous swerve, The fact she is gone we cannot deny. But I know she is looking down with love and a gleam in her eye. Funeral Services were held on Friday, April 21, 2017 at Hoch Funeral Home of Ainsworth, Nebraska. Pastor Russell Thayer officiated the service. Special CD music selections of "The Dance" by Garth Brooks and "Live Like You Were Dying" by Tim McGraw were provided. Special remarks were shared by family and friends. Pallbearers were Tony Dunbar, John Dunbar, Curtis Reed, Bailey Porter, Devon Porter, and Bryce Porter. Honorary bearers were Austin Dunbar, Korah Dunbar and Londyn Dunbar. In lieu of flowers, memorials were suggested to the family for Nicole's children and can be sent to the Union Bank & Trust in Ainsworth or Valentine, Nebraska.

Ronnie Nicole Porter "Pooh Bear" This is not a normal obituary, for it is written for an extraordinary woman. Ronnie Nicole Porter lost her long and courageous battle with cancer, in the early morning hours of Monday April 17, 2017. Ronnie... View Obituary & Service Information

The family of Ms. Ronnie Nicole Porter created this Life Tributes page to make it easy to share your memories.

Ronnie Nicole Porter
&quot;Pooh Bear&quot;
This is not a normal obituary,...