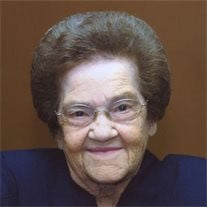 Roma Uvern Gipson was born October 7, 1918, southeast of Springview, Nebraska to Clarence Albert Gipson and Ellen Letitia (Blakely) Gipson. Roma passed away at age 94 on Christmas Day December 25, 2012 at the Ainsworth Care Center in Ainsworth, Nebraska after a recent battle with kidney disease. Together, Clarence and Ellen raised a beautiful family of 14 children with Roma being the couple's second to youngest child as well as their youngest daughter. Known as the "Famous 14", Roma's siblings included: Lester Gipson; Floyd Gipson; Gladys (Gipson) Carr; Merl Gipson; Bertha (Gipson) Gilliland; Marvel (Gipson) Carr; Eunice (Gipson) Wilkins; Mertie (Gipson) Byington; Letha (Gipson) Kendall; Mildred (Gipson) Minshall; Velma (Gipson) Kuhn; Wayne Gipson; and Eugene Gipson. Clarence and Ellen also had a stillborn son before Roma. When Roma was born, the family was living on a farm near Springview in Keya Paha County. Clarence and Ellen lived most of their married life in this area; except when they moved to Clarkston, Washington to be near Clarence's aged mother Cynthia Gipson. Upon Grandma Gipson's death, Clarence and Ellen's family returned to Nebraska and remained in the Springview area. Roma was baptized at age 16 the summer of 1934 in the Snake River in Idaho. She attended school through the 8th grade in Keya Paha County. Although Roma did not have an opportunity to complete her high school education, throughout her 94 years Roma would prove to all those who knew this extraordinary lady, that her knowledge of life and her wisdom was beyond compare. Roma was only 18 when the Gipson family lost their mother Ellen. She passed away from a stroke on June 26, 1936 at age 62. Twenty-eight years after his wife's death, Clarence passed away on the same date ‒ June 26, 1964 at age 95. Roma and Laurence Alfred Conrad were married August 26, 1937 in Burke, South Dakota by the Justice of the Peace Wm. Keanbill. The couple lived in Long Pine, Nebraska and Springview for the first four years of their marriage. On June 13, 1938 the couple was blessed with a baby daughter Ramona June. In February 1944 during World War II, Laurence was drafted into the U.S. Navy where he served as a ship's cook third class on the islands of Ulithi and Guana. While Laurence was serving his country, Roma's sister Bertha came to stay with Roma and the young couple's daughter Ramona. It was also during this time Laurence and Roma's second daughter Linda Kathleen was born on April 9, 1945. However, Laurence did not see his new baby girl until Linda was almost seven months old when he was discharged from the military. Five years later the Conrad family welcomed their third baby daughter Janet "Susie" Ann on August 12, 1950. The Conrad family lived on their beloved farm located near the beautiful, scenic Niobrara River in Brown County. Laurence stayed busy tending to the farm while Roma and the girls assisted with the daily chores, including tending to the chickens and milking the cows. In 1955, the couple rented their farm and moved to Oregon for a year; however, Laurence and Roma chose to return to Nebraska to their "haven farm" where they knew their hearts belonged. The family then remained on their farm until August 1966 when they moved to Bassett, Nebraska. On May 30, 1975 Laurence passed away from a sudden heart attack at age 66. Yet, Roma was not alone. She was surrounded by the love of her daughters, her siblings, her nieces & nephews, and her numerous friends. For 10 years Roma worked as a nurse's aide at the Bassett Care Center – tenderly assisting the residents with her gentle nature and kind heart. In the summer of 1976 Roma moved to Ainsworth with her two cats Meow Meow and Kitten, whom she had inherited from her daughter Janet. In Ainsworth Roma worked as a nurse's aide at the Brown County Hospital. Throughout her years of employment at the hospital, Roma developed many endearing friendships with her fellow hospital staff members, as well as the patients & their family members. She chose to retire from the hospital in her 70s, but that did not slow Roma down. She stayed busy caring for her beloved grandchildren and her pampered pet cats, as well as working on her many sewing/craft projects. Roma was also a devoted Nebraska Cornhuskers fan – even having had the opportunity to meet legendary Huskers Coach Tom Osborne. Roma endured many hardships throughout her life, including the loss of her daughter Linda on February 3, 1998. It was Roma's deep faith in God which helped guide her through these troubling times. As a mother, a grandmother, an aunt, a cousin, a friend, a co-worker, a caretaker, a neighbor, and more – Roma touched many lives ‒ whether it was her irresistible wit, her cute smile, her gentle hugs, her humble nature, or most of all ‒ her compassion for others and caring heart. Survivors include her two daughters Ramona Painter of Newport, Nebraska and Janet Huggins of Ainsworth; three son-in-laws Dale Painter of Newport, Larry Cernin of Omaha, Nebraska and Kenneth Huggins of Ainsworth; 10 grandchildren; 16 great-grandchildren; 24 great-great grandchildren; and many nieces and nephews. Along with her parents, her husband, and her daughter Linda, Roma was preceded in death by her 14 siblings, a great-grandson J.J. Brandon Painter, and many nieces & nephews. Funeral Services were held on Monday, December 31, 2012 at the Hoch Funeral Home in Ainsworth, Nebraska with Pastor Kent Conrad officiating over the service. Special music was offered by Sherry Campbell, Lisa Wiebesieck and Georg Williams, with song selections of "Amazing Grace," "How Great Thou Art," and "In The Garden." A CD selection of "Angels Among Us" by Alabama was also provided. Instrumental selections were provided by Roma's great-grandchildren, Sydney Kuncl and Trepper Huggins. Personal remembrances were shared by family members. Pallbearers were, Anthony Painter, Kenny Cernin, Tim Painter, Jason Huggins, Justin Huggins and Terrill Painter. Honorary bearers were all of Roma's family and friends. Burial was held at the Grandview Cemetery in Long Pine, Nebraska. Memorials were suggested to the family in her name for future designation.

The family of Roma U. (Gipson) Conrad created this Life Tributes page to make it easy to share your memories.