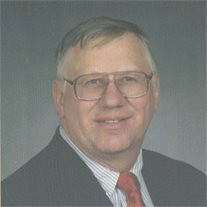 Roger F. Bernt was born on August 28, 1948 to William George Bernt and Mabel Frances (Janak) Bernt at Stuart, Nebraska, and passed away on May 9, 2018, at Amarillo Texas. In 1956, Roger moved, with his parents, two sisters and uncle, from the family farm northeast of Newport in Rock County to a farm southwest of Stuart in Holt County. Roger attended one-room country schools until going to Stuart High School. His interest in figuring out how things worked shaped his choice of profession. After graduating from high school, he attended the University of Nebraska in Lincoln where he earned a Bachelor of Science in Electrical Engineering. Upon graduation, Roger began his professional career at the Grand Island Army Navy Munitions Plant, working for Mason Hanger, an architectural-engineering contractor. When the munitions plant was acquired by a Texas company in the late 1970's and was consequently closed, Roger was offered a job with the new company. He gladly accepted, moved to Amarillo, and adopted Texas as home. He did, however, remain a Nebraska football fan - to the bemusement of his co-workers. He spent the rest of his career working at Pantex, a nuclear energy facility near Amarillo. Roger belonged to the St. Joseph Parish and was very active in the Knights of Columbus, attaining 4th Degree. He participated in a wide range of K of C activities; from ceremonies in full regalia to fundraiser suppers where he helped cook and serve many, many meals. Roger was dedicated to his profession and enjoyed serving the church and his fellow human beings. Even after death, he chose to be generous as an organ donor for Life Gift. Roger is survived by his sisters and their husbands Susan and Richard Sisson of Ainsworth, Nebraska and Opal and Eric Doerr of Lincoln, Nebraska; two nieces and their husbands, Metha and Justin Evers and Klara and Kaman Daily; two nephews, Arthur Doerr and Oliver Doerr;, and four "grand nephews and nieces," William Daily, Emmalyn Evers, Haiston Evers, and Wyat Daily, as well as cousins. A Rosary/Prayer service will be held at the St. Pius X Catholic Church in Ainsworth, at 7 PM on Tuesday, May 22, 2018. Memorial Services will then be held at 9:30 AM on Wednesday, May 23, 2018 at the St. Pius the X Catholic Church with Father Phil Flott serving as Celebrant. Music will be provided by DeAnn Morse. Special song selections will be "Rain Down" and "Morning Has Broken." Honorary bearers will be nieces and nephews; Metha Evers, Klara Dailey, Arthur Doerr, Arthur Doerr and Oliver Doerr. Inurnment will follow at the St. Boniface Cemetery in Stuart, Nebraska. In lieu of flowers, memorials are suggested to the family for a future designation. Hoch Funeral Homes of Ainsworth is in charge of the arrangements. Online condolences may be submitted to www.hochfuneralhome.com

Roger F. Bernt was born on August 28, 1948 to William George Bernt and Mabel Frances (Janak) Bernt at Stuart, Nebraska, and passed away on May 9, 2018, at Amarillo Texas. In 1956, Roger moved, with his parents, two sisters and uncle, from the... View Obituary & Service Information

The family of Mr. Roger F. Bernt created this Life Tributes page to make it easy to share your memories.