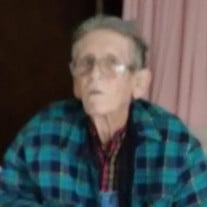 Robert Dean Turpin was born April 4, 1931 in Mariaville, Nebraska to John Michael and Cora (Hall) Turpin. Robert was the youngest of ten children. The family lived in the Kirkwood-Mariaville area throughout his childhood. He attended school at Mariaville through the eighth grade; never attending high school. On February 6, 1952 he joined the United States Army where he achieved the rank of Corporal in the Military Police. He was honorably discharged on February 6, 1954. While serving in the military he met Georgia Pauline Hustead, a private in the Women’s Army Corps. They married on September 4, 1953 and lived in Indianapolis, Indiana until discharged. Three children were born into the union; Mace Aaron, Nadine Sue and Michael Kent. When they returned to Bassett, Robert worked at Morey Thompson’s Blacksmith Shop, helped construct the Rock County Telephone building and spent 30 years working for the City of Bassett. Robert is preceded in death by his wife, daughter, three brothers, six sisters, and a brother-in-law. He is survived by sons; Mace Turpin of Bassett, and Michael (Melody) Turpin of Bassett; grandsons; Adam and Cory with wife, Amanda; two sisters-in-law; numerous cousins, nieces and nephews; a few old friends and many other memories. Memorial Graveside Services were held on Saturday, June 27, 2020 in the Bassett Memorial Park Cemetery with Pastor Jenice Epp officiating at the event. Honorary Urn Bearers were: Aynsley Haller, Allan Lear, Chad Stec, Don Pfeifer, Bob Hutton and Andy Irish. Military Honors were conducted by Bassett American Legion Post #123. In lieu of flowers, memorials are suggested the family in Bob’s name for a future designation. Arrangements were under the direction of the Hoch Funeral Home of Bassett.

Robert Dean Turpin was born April 4, 1931 in Mariaville, Nebraska to John Michael and Cora (Hall) Turpin. Robert was the youngest of ten children. The family lived in the Kirkwood-Mariaville area throughout his childhood. He attended... View Obituary & Service Information

The family of Mr. Robert D. Turpin created this Life Tributes page to make it easy to share your memories.