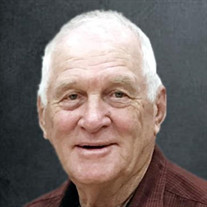 Robert W. (Bob) Micheel was born July 30, 1942 at the Brown County Hospital in Ainsworth, Nebraska to Otto W. Micheel and Dorothy “Pinkie” (Adams) Micheel. He passed away Friday, January 14, 2022 at his home in Ainsworth at the age of 79. Bob always knew that life was special and to be allowed to live on this earth was a blessing. He received Christian Baptism in 1953 at First Methodist Church of Ainsworth. He respected the Lord and always knew there was a higher power guiding us. He made sure that he was a man of his word, a man of honor, and a man who was not afraid to love. He attended elementary school at District #21 and graduated from Ainsworth High School in 1960. During high school Bob competed in football, basketball along with track & field. He began his professional career by attending Norfolk Junior College. He then worked at the Ainsworth and Bassett Livestock Cattle Auctions and as an assistant to veterinarian Doc Al Edwards. In 1963 Bob, his brother Bill and dad Otto, created Micheel and Sons. They installed one of the first center-pivot irrigation systems in Brown County. In later years his crop adjusting profession allowed him to travel extensively, cultivating friendships that still remain today. He truly loved people and his humor was contagious. The highlight of his life was his family. Bob married his high school sweetheart, the one he called his Sunshine, Geraldine Spearman, May 26, 1963. The following year they moved to “the home place” south of Ainsworth. His love of ranching ensured that he would always be a life-long rancher. There was always love in the Micheel home and the union of Bob and Geraldine created three children: Jeff, Lesa and Traci. He loved his family and they loved him. Bob believed in community. He served on the school board of District #65, the Farmers-Ranchers Co-op Board and was also a member of the Elks, Masons and the Husker Beef Club. Bob enjoyed golfing, hunting and was an avid sports fan. Win or lose he remained a loyal Husker fan. But even more important was being a fan of his family! He thoroughly enjoyed watching his grandchildren, Layne, Logan, AJ and Aubrie play their respective sports. He was also proud of his pilot's license, an accomplishment few obtain. He purchased an Aeronca Champ and would fly over pastures checking on cattle and irrigation systems. He went on many hunting trips. His fondest memories were elk hunting in Colorado, harvesting the first bull elk in Brown County Nebraska and a once in a lifetime bear hunt to Hells Canyon, Oregon with his son Jeff. He told his family that one of his life’s highlights was taking his grandsons on their elk hunting trips. Seeing their faces beaming with exhilaration and self-accomplishment made him so happy. The trips were great because of whom he got to experience them with. He had a never ever quit attitude. His motto was “there is not a cure today, but there might be tomorrow.” He was a fighter and his will to survive was fueled because he didn’t want to miss anything with his wife, kids and grandkids. He knew everything in life, from the big things to the little things were important. He is survived by his wife Geraldine; son, Jeff Micheel of Johnstown, Nebraska; daughters, Lesa and husband Bruce Mitchell of Ainsworth, and Traci Parde of Lincoln, Nebraska; grandchildren, Layne, AJ, Logan and Aubrie; brother, Bill and his wife Ruth of Ainsworth; sister, Thelma and her husband Dave Miller of Fort Calhoun, Nebraska; and many special family members and life-long friends. Memorial Services were held on Tuesday, January 18, 2022 at the Hoch Funeral Home in Ainsworth with Jim Wakefield officiating at the service. The obituary was read by granddaughter, Layne Mitchell. The CD selections of “Why Me Lord” by Kris Kristofferson and “How Great Thou Art” by Carrie Underwood were played. Inurnment will take place at a later date. Memorials were suggested to the family in Bob’s name for future designation. Hoch Funeral Home of Ainsworth was entrusted with the arrangements and online condolences may be left for the family at: www.hochfuneralhome.com

The family of Robert W. Micheel created this Life Tributes page to make it easy to share your memories.