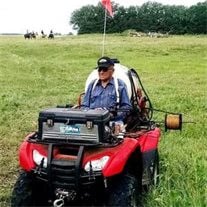 Robert "Bob" Lee Zwiebel was born, August 1, 1924 to William and Metha (Boehl) Zwiebel near Ainsworth, Nebraska. He passed away at his home on February 4, 2015 at the age of 90. Bob attended country school west of Ainsworth in rural Brown County and graduated from Ainsworth High School in 1942. He joined the Army in 1944 and was sent to basic training in Miami Beach. From basic training he was sent to Fort Logan, CO where he was put in the Guard Squadron. Bob signed up for and was accepted into the Air Corps. He attended Cadet Training at Shepherd Field in Texas. While in Texas, he took classes at Texas A & M University. He took preflight training in San Antonio, Texas. He graduated from Pilot Training Class of 44H in South Carolina. He was trained to fly a B-25s, specifically the J-32 bomber. He was sent to various locations throughout the United States where the Army Corps was preparing pilots to be sent on combat tours overseas. At each location, pilots were selected in alphabetical order and the quota was always met before reaching the name Zwiebel, as it was at the end of the alphabet. While waiting in California to be selected for combat, the US bombed Hiroshima and Nagasaki thereby ending the war. After an honorable discharge from the Army Air Corps, Bob returned to Nebraska where he worked for Kellogg Company in Sioux City, IA. When his brother Don joined the Army in 1951, Bob returned to Ainsworth to work the farm. When Don returned home from the service, the brothers formed a partnership. They farmed, milked cows and also tried their hand at raising hogs. They expanded into a cow/calf operation with a small feedlot and continued their partnership until Don passed away in 1995, at which time, Don's wife Karen, became Bob's business partner. Bob's nephews, (Don's sons) Dan, Dale and Phil worked for the partnership and worked closely with him. Bob never really retired. He spent most of his days out on the farm driving his 4-wheeler, checking cattle, driving the fence line or spraying leafy spurge. He was quite impressed with today's technology when he learned to use the GPS and mark the spots where he sprayed the leafy spurge so that he could easily return the following year. He was a member of the American Legion and held the position of Post Commander. He was a familiar face at the local café where he and his friends would attempt to solve the world's problems. Bob was also a member of the Elks Lodge #1790 and regularly attended Friday night cards. He was an avid card player and 'rumor' had it, he may have spent more than a little time at the Rosebud Casino near Valentine, NE. Nothing made Bob happier than to beat his nieces/great-nieces and nephews/great-nephews at a game of Cribbage. Bob was preceded in death by his parents, his two brothers John (Virginia) Zwiebel and Don Zwiebel, his three sisters Opal (Marvin) Sisson, Doris (Lawrence) Clapper and Shirley (Ira) Garten, niece Mary Zwiebel and nephew Larry Sisson. He is survived by sister-in-law Karen Zwiebel, nieces and nephews Dan (Susan) Zwiebel, Dale (MiSu) Zwiebel, Phil Zwiebel, Iris Sisson, Richard (Susan) Sisson, Roger (Sandy) Sisson, John (Kathi Lee) Zwiebel, Carol (Pete) Margitan, James Zwiebel, Robert (Liz) Zwiebel, Zandra (Scott) Risdal, Glennie Sheehy, Irene (Jim) McDermott, Karen (Jerry) Leach, Bill (MaryAnn) Clapper, Jo (Dan) Dailey, Dana (Margaret) Garten, along with numerous great nieces, nephews and other family members and friends. A Celebration of life service was held on February 11, 2015 at Hoch Funeral Home in Ainsworth, NE with Pastor Eldon Davis officiating at the service. Special CD Selections of "The Funeral" from the American Sniper Soundtrack, "Amazing Grace" by LeAnn Rimes, "Old Rugged Cross" by Alan Jackson, "How Great Thou Art" by Carrie Underwood and "Please Remember" by LeAnn Rimes were provided. A special reading entitled "Close The Gate" was given by great-nieces, Courteney Zwiebel & Tawny Allen. Organizationl Rites were given by the Ainsworth Elks Lodge #1790. Pallbearers were James Zwiebel, Logan Zwiebel, Cassidy Zwiebel, Jesse Zwiebel, Dane Dailey and Jeff Sisson. Honorary bearers were all of Bob's other family and friends. Burial was held at the Ainsworth Cemetery with Military Honors provided by the Ainsworth American Legion Post #79. Memorials were directed to the Brown County Hospital Cardiac Rehab Unit, the American Legion, Ainsworth Elks Lodge #1790 or to the donor's choice.

Robert "Bob" Lee Zwiebel was born, August 1, 1924 to William and Metha (Boehl) Zwiebel near Ainsworth, Nebraska. He passed away at his home on February 4, 2015 at the age of 90. Bob attended country school west of Ainsworth in rural Brown County... View Obituary & Service Information

The family of Mr. Robert L. "Bob" Zwiebel created this Life Tributes page to make it easy to share your memories.