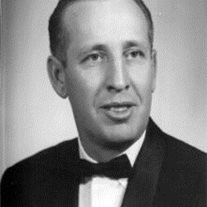 Robert Donald Scott was born to Alexander and Ida (Weber) Scott on March 13, 1923 in Merriman, Nebraska, the second of four children. He passed away on February 28, 2017 in Ainsworth, Nebraska. Bob was raised in Merriman and graduated from Merriman High School. He was united in marriage to Dora Elizabeth Ricedorff on June 6, 1943. They had two children, a daughter, Pam and a son, Rick. Bob and Dora lived in Crawford, Chadron and Omaha, Nebraska in the early days of their marriage. In 1946 he went into business with his father-in law, B.C. Ricedorff and they moved to Valentine to run the Red and White store there. Subsequently they moved to stores in Hay Springs and then to Ainsworth in 1953. Bob was active in civic organizations in Ainsworth. He was proud to be a member of the Sandhills Shrine, transporting area children and their families to Minneapolis for their appointments at the Shrine Hospital. He was a member of B.P.O.E. Elks Lodge # 1790, serving as Exalted Ruler; Order of Eastern Star, serving as Worthy Patron; and a Master Mason of Silver Cord Lodge No.224. He was a charter member of B.P.O.E. Elks Lodge #2559 in Sun City, Arizona. He was a member of the Methodist Church. Bob loved to play golf and to share a good story and a drink on the 19th hole. Some of his happiest days were at the Ainsworth and Bassett golf courses. In 1973, Bob and Dora bought their first home in Sun City. They joined the Sun City Country Club where he golfed until he was 91, the oldest active golfer at the Club. Every summer Bob and Dora returned "home" to Nebraska and their cabin on the creek at Hidden Paradise. They returned to Ainsworth for good in the summer of 2016 and resided at Cottonwood Villa. Bob was preceded in death by his parents, Alex and Ida Scott; brother, Ashley; sisters, Lavon Ward and LaVern Yarbrough; and daughter-in-law, Emily Scott. He is survived by his wife of 73 years, Dora Scott of Ainsworth; daughter, Pam Scott of Las Vegas, Nevada; son, Rick (Joyce) of Omaha, Nebraska; five grandsons, Mark Olson (Marianne) and Scott Olson (Aura) of Las Vegas, Dale Scott (Kim) of Omaha, Clint Scott (Lauren) of Austin, Texas, and Justin Burr Scott (Aman) of Dallas, Texas and one granddaughter, Mary Kate Scott of Omaha. He is also survived by eight great-grandchildren, Cole and Cameron Scott, Courtney and Mia Scott, Dylan, Caroline and Ava Scott and Arianne Olson, along with numerous nieces and nephews. Memorial services were held on Saturday, March 4, 2017 at Hoch Funeral Home in Ainsworth. Pastor David Randall officiated at the service. Honorary bearers were all of Bob's golfing friends. Al Shipps, long time friend, shared special remarks. Burial of his ashes will be held at a later date in the Mt. Hope Cemetery at Wood Lake. In lieu of flowers, Bob had requested that memorial donations be made to the Shrine Hospital through the Sandhills Shrine Club. They can be sent to: Sandhills Shrine Club % Jeremiah Schartz 47494 878th Rd. Atkinson, NE 68713.

Robert Donald Scott was born to Alexander and Ida (Weber) Scott on March 13, 1923 in Merriman, Nebraska, the second of four children. He passed away on February 28, 2017 in Ainsworth, Nebraska. Bob was raised in Merriman and graduated from... View Obituary & Service Information

The family of Mr. Robert D. "Bob" Scott created this Life Tributes page to make it easy to share your memories.