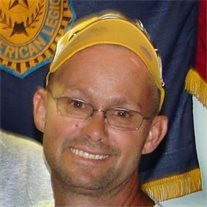 Ricky "Rick" J. Finley was born October 19, 1958 in Twin Falls, Idaho to Betty Jean (Lucht) and Richard "Dick" Finley, and passed away suddenly April 4, 2015, at the Brown County Hospital in Ainsworth, Nebraska. He and his family moved back to Nebraska in 1963 where he attended Johnstown Grade School and graduated from Ainsworth High School. After high school he attended a tech school in Lincoln, Nebraska where he met the love of his life Patty (Patricia Beckley). They were united in marriage on July 12, 1980 in Lincoln. They later moved to Ainsworth and were blessed with a son Nathan. Rick was an avid sports fan of the Nebraska Huskers, the Pittsburgh Steelers and the Ainsworth Bulldogs. He worked at the Ainsworth School for 30 years and also at the Ainsworth Feed Yard. Rick was currently working for the Rolling Stone Feed Yard. Rick was a "work-a-holic" but enjoyed fishing and going to the Beebout cabin during duck hunting season. He also looked forward to his trips to Wallace, Nebraska, spending time with his brother Kim and his family. He loved going to the Finley reunions to re-unite with all the other relatives. Rick is preceded in death by his mother Betty Jean, father Richard "Dick" and brother Olen Scott. He is survived by his wife Patty of Ainsworth and son Nathan of Valentine, Nebraska. Step-mother Bonnie of Ainsworth; sisters, LaRene and husband Brent Beebout of Kearney, Nebraska, Beccy and husband Mike Assarson of Warner, South Dakota and Maria of Denver, Colorado; sister-in-law, Kathy Finley of Longmont, Colorado; brothers, Kim Finley of Ashland, Nebraska, Bob and wife Teresa of Irving, Texas, Joey and wife April of Ainsworth, Richard L. and fiancé Melody Pebley of Grand Island, Nebraska and Scotty A. of Wichita, Kansas. Along with numerous nieces, nephews, cousins, aunts, uncles, and a host of friends. A scholarship memorial fund is being established in Rick's name at the Ainsworth Community Schools. Funeral Services were held on April 10, 2015 at the Ainsworth Church of the Nazarene with Pastor Russell Thayer officiating the service. Music was provided by Kathy Bennett. Special music was provided by Rodney and Tonya Luther singing selections of "You Light Up My Life" and "Jesus Loves Me", as well as a CD selection of "Have You Seen The Rain" by Noelle Bybee & Sawyer Fredericks. Poems were read by Candace Clark and Melody Pebley. Pallbearers were, close friend, George Spanel and nephews, Ryan Finley, Jay Beebout, Josh Anderson, Travis McConnell, Blake Beebout, Tylor Assarsson and Jeff Lofgren. Honorary bearers were all of Rick's nieces, nephews, and Co-workers at Rolling Stone. Burial was held at the East Woodlawn Cemetery near Johnstown, Nebraska. In lieu of flowers, memorials were suggested to the family for a future designation.

Ricky "Rick" J. Finley was born October 19, 1958 in Twin Falls, Idaho to Betty Jean (Lucht) and Richard "Dick" Finley, and passed away suddenly April 4, 2015, at the Brown County Hospital in Ainsworth, Nebraska. He and his family moved back... View Obituary & Service Information

The family of Mr. Ricky Jay Finley created this Life Tributes page to make it easy to share your memories.