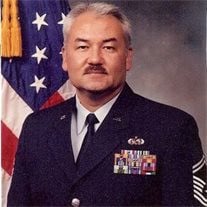 Rickie D. Lentz was born August 23, 1957 at Madison, Wisconsin to Elmer and Eiko Lentz. He passed away October 24, 2015 at St. Elizabeth Hospital in Lincoln, Nebraska. Rick was born into a military family and enjoyed a life full of travel and service to his country. He comes from a long line of Lentz ancestors who settled in the Long Pine, Nebraska area. Rick spent several school years in Long Pine, and also graduated from Ainsworth High School in 1975. Rick met his wife, Kris Wiley, while stationed at Andrews Air Force Base, Maryland. They were united in marriage on November 14, 1987 at Ellsworth Air Force Base, South Dakota. Two children were born to this union; Autumn Rae and Jared Thomas. Rick and his family continued the military tradition, serving 28 years in the United States Air Force. Upon retirement in June of 2004, Rick and his family moved back to Ainsworth. Rick enjoyed living back in the Sandhills of Nebraska, being close to his family and friends. He especially enjoyed riding his Harley with his brother Alan, and being out on the open roads of the Sandhills. Any excuse to "hang out" with his family, whether it be to go fishing or have a BBQ, Rick especially enjoyed. He also loved music, playing his guitar, and anything involving new technology. In 2012, Rick and Kris moved to Lincoln, and enjoyed a quiet life as empty nesters. While in Lincoln, Rick fought his toughest battle with cancer. A warrior to the bitter end, Rick laid down his sword, and surrendered peacefully moving on to his eternal resting place in heaven. Rick was preceded in death by both sets of grandparents; two uncles, Wiley Lentz and Ralph Lentz and an aunt, Shirley J. Lentz. He leaves to mourn his passing, his wife of almost 28 years, Kris Lentz of Lincoln; son, Jared Lentz of Warrensburg, Missouri; daughter, Autumn (Seth) Davis of Quantico, Virginia; parents, Mr. & Mrs. Elmer T. Lentz Jr. of Ainsworth; sister, Terri (Dr. Jerry) Quimby of Portsmouth, Rhode Island; brothers, Alan (Teresa) Lentz and Antony Lentz of Ainsworth; father-in-law, Jim (Barbara) Wiley of San Diego, California and mother-in-law, Donna Ramsay of Bend, Oregon; along with uncles, aunts, nieces, nephews and a host of other family members. Funeral Services were held on October 28, 2015 at the Evangelical Free Church in Ainsworth with Pastor Mick Thornton officiating at the service. Pallbearers were Alan Lentz, Tony Lentz, Dr. Jerry Quimby, Mike Lentz, Dan Lentz, Pat Lentz, Bill Lentz, Tom Lentz, and Bob Lentz. Burial with Military Honors by the Ainsworth American Legion Post #79 were held at Grandview Cemetery in Long Pine, Nebraska. In lieu of flowers, memorials were suggested to the family in Rick's name for future designation.

Rickie D. Lentz was born August 23, 1957 at Madison, Wisconsin to Elmer and Eiko Lentz. He passed away October 24, 2015 at St. Elizabeth Hospital in Lincoln, Nebraska. Rick was born into a military family and enjoyed a life full of travel... View Obituary & Service Information

The family of Mr. Rickie Dean Lentz created this Life Tributes page to make it easy to share your memories.