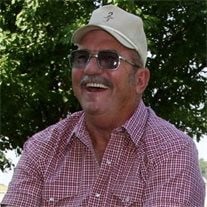 Richard "Dick" Tracy was born on August 7, 1946 to Frank and Evelyn (Mitchell) Tracy at Chambers, Nebraska. He was the oldest son of six siblings. His childhood was spent in and around Chambers. During his youth, he worked in the Chambers area trying several different jobs including: working at a welding shop, helping his uncle move houses, working on a ranch, stacking hay, milking cows, pitching hay into a small square baler, and hoisting the finished hay bales onto a semi. These job experiences were accomplished before and after school. He worked a summer on the interstate, near Lexington, Nebraska. He also spent a summer working at a cheese plant in O'Neill, Nebraska and a meatpacking house in Fremont, Nebraska. Following graduation from Chambers High, Dick enlisted in the Marine Corp serving from 1966 to 1968. This included a tour in Vietnam. Upon his return, he moved to Bassett, Nebraska to work with his brother-in-law, Bob Bernhardt at Birchwood Construction. Shortly after his move to Bassett, Dick married Susan Taylor on November 2, 1968. To this union, the couple was blessed with four children: Kris, Shannon, Teresa, and Jason. Dick started Tracy Welding in the former Ted Blake building in March of 1969. Before starting his own construction company in 1979, he worked for K & K farming, then for Krieger Farming, and lastly Ashgrove Farming. In 1992, Dick fulfilled his dream of raising Black Angus cattle west of Bassett. Dick's main push to raise cattle was the ability it gave him to support his children in their activities. Dick was a lifetime member of the American Legion, VFW, and Disabled Veterans, serving as both Vice and Commander at Bassett Post Legion #123. He had also served as a Bassett Volunteer Fireman. Dick helped coach youth boxing in Bassett and was a member on the Bassett Area Matmen (BAM) Board. He was a member of St. Peter Lutheran Church. Numerous children near and far knew Dick as "Uncle Dick". Dick always had a story to tell and loved to reminiscence with all those that stopped by. Once it was said, how could a person do so many different things in a lifetime? It helped that he had his priorities. Dick's love for his family and friends always came first. Once they were taken care of, his ranch, Liberty Acres, consumed most of his time. This was most evident in his final years. A majority of the time, he could be found out tinkering on tractors or feeding his livestock. He always had time to stop and "chew the fat" with any passerby. He was happy to share advice, a hand, equipment, and anything else he had to offer to his fellow man. Dick died in the early morning hours of November 19th. He was preceded in death by his parents; brother, Ralph Tracy; sister, Mona Mangum; nephew, Darin Tracy. He is survived by his wife, Susan; his daughters: Kristen (Tom) Krolikowski of Valentine, Nebraska; Shannon (Jason) Jenkins of Wichita Falls, Texas; Teresa Savick of Cozad, Nebraska; son, Jason (Tara) Tracy of Gibbon, Nebraska; ten grandkids, Spencer, Trevor, and Brianna Jenkins; Savannah and Garrett Savick; Faith, Jacob, and Titus Tracy; Gage and Tessa Krolikowski; sisters, Carol (Bob) Bernhardt of Lincoln, Nebraska; Kay (Larry) Strubel of Chambers; brother, Dave (Deb) Tracy of Gibbon, Nebraska; and many nieces, nephews and all the other kids that knew him as "Uncle Dick". Funeral services were held on November 22, 2014 at the St. Peter Lutheran Church in Bassett, Nebraska with Pastor John Brink officiating the service. Music was provided by Faye Smith with congregational selections of "Here I Am Lord", "Old Rugged Cross" and "On Eagle's Wings". CD selections provided were, "Life's Railway to Heaven" by Patsy Cline, and "Ragged Old Flag" by Johnny Cash. Pallbearers were, Monte Strelow, John Wagoner, Reno Gordon, Don Pfeifer, Gale Lingenfelter and Jerome Murphy. Honorary bearers were all of Uncle Dick's kids and grandkids. Burial was held at the Bassett Memorial Park Cemetery with Military Honors being provided by the Bassett American Legion Post #123 under the direction of Hoch Funeral Home in Bassett. Memorials were directed to the Bassett American Legion Post #123 or to the Rock County Hospital in Richard's name.

Richard "Dick" Tracy was born on August 7, 1946 to Frank and Evelyn (Mitchell) Tracy at Chambers, Nebraska. He was the oldest son of six siblings. His childhood was spent in and around Chambers. During his youth, he worked in the Chambers area... View Obituary & Service Information

The family of Mr. Richard Tracy created this Life Tributes page to make it easy to share your memories.