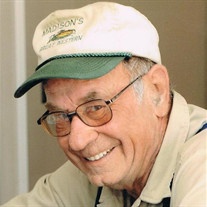 Richard Eugene Sisson was born July 17, 1942 at Ainsworth, Nebraska to Marvin and Opal (Zwiebel) Sisson. He joined his brother Larry and was followed by Roger. Rich passed away on December 24, 2021 at Brown County Hospital in Ainsworth. He attended Ainsworth High School, later enlisting in the United States Navy in 1962. He returned to Ainsworth after being honorably discharged, where he met his future wife Susan Bernt. They were married on December 27, 1978. They were joined by two daughters: Metha Ann and Klara Lee. During the years Rich worked at several jobs, mostly involving truck driving, which allowed him to get to know and enjoy many people. He thoroughly enjoyed his four grandchildren: William Sisson, Emmalyn Evers, Halston Evers, and Wyatt Dailey. Richard was preceded in death by parents, Marvin and Opal Sisson; brother, Larry; grandparents, Lee and Fern Sisson and William and Metha Zwiebel; along with aunts and uncles. He is survived by his wife, Susan of Ainsworth; daughters, Metha Ann (Justin) Evers of Omaha, and Klara Lee (Kaman) Dailey of Stapleton, Nebraska and their children; brother, Roger (Sandy) Sisson, sister-in-law, Iris Sisson and aunt, Karen Zwiebel all of Ainsworth; along with cousins, nieces and nephews. Funeral Services were held on Friday, December 31, 2021 at the Hoch Funeral Home in Ainsworth with Fr. Mike Wetovick as Celebrant. Music was provided by Nichole Flynn with the special songs being played of “Be Not Afraid” and “Amazing Grace.” Casketbearers were: Ryan Cleal, Tony Buckles, Dave Sherman, Lenny Fernau, Tom Lucht and Charlie Cleal. Honorary Bearers were: All of Rich’s Other Friends and Family. Burial was in the Ainsworth Cemetery with Military Honors by Ainsworth American Legion Post #79. Memorials were suggested to the family in his name for a future designation.

Richard Eugene Sisson was born July 17, 1942 at Ainsworth, Nebraska to Marvin and Opal (Zwiebel) Sisson. He joined his brother Larry and was followed by Roger. Rich passed away on December 24, 2021 at Brown County Hospital in Ainsworth. He... View Obituary & Service Information

The family of Richard E. Sisson created this Life Tributes page to make it easy to share your memories.