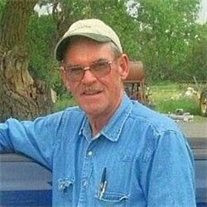 Richard L. Lingenfelter, 65, passed away February 11, 2015 at his home in rural Bassett, after a four and half year battle with esophageal cancer. Rick was born December 16, 1949 to William and Wanda (Vargason) Lingenfelter in Ainsworth, Nebraska. He grew up with his younger brother, David, on the Niobrara River, and the boys attended a rural school before going to Bassett Grade School. Rick graduated from Rock County High School with the Class of 1968. In the fall following graduation, he went to Sidney, Nebraska, to attend the Western Nebraska Technical College. Rick married Janet Allison on March 29, 1969 in Bassett, and the couple made their first home in Sidney, where they had their first son, Gale. During their time in western Nebraska, they also lived in Lexington where Rick worked as a mechanic. In 1971, they returned to Rock County to the ranch of Janet's parents, Bob and Anita Allison, south of Bassett. They ranched and farmed in a partnership with Janet's brother, Keith Allison. While residing on the ranch, son Jeffrey was born. Rick worked at Sandhill Equipment for a short time before he and Eddie Davis started D&L Service in 1974. The family moved to their current place, west of Bassett, in 1976. Another son, Kyle, joined the family. Rick and Janet became the sole owners of D&L Service in 1984. Their irrigation business along with raising cattle grew into a partnership with son, Kyle. He enjoyed the outdoors and hunting, and fishing with his family. Rick and Janet attended many activities for their sons and later for their grandchildren. Rick was preceded in death by his father, Bill; father-in-law and mother-in-law, Bob and Anita Allison; step-father-in-law, Gerald Gesiriech; and sister-in-law, Faye Allison. He is survived by his wife, Janet; three sons, Gale (Leslie) Lingenfelter of Roca, Nebraska, Jeff (Michelle) Lingenfelter of Lincoln, Nebraska and Kyle Lingenfelter of Ainsworth; mother, Wanda Lingenfelter of Bassett. Six grandchildren, Alyx, Jessica, Kenzie, Brandon, Raegan, and Rylee, brother, Dave (Maxine) Lingenfelter of Withee, Wisconsin; brothers-in-law, Keith Allison of Long Pine, and Dr. Jay (Lynnelle) Allison of Freeman, South Dakota; along with nieces and nephews. Memorial Services were held on February 14, 2015 at Hoch Funeral Home in Ainsworth, Nebraska with Pastor Dennis Quigley officiating the service. CD Selections of "Amazing Grace" by The Statler Brothers and "Old Rugged Cross" by Tennessee Ernie Ford were provided. Honorary Bearers were all of Rick's other family and friends. Inurnment was held at the Willowdale Cemetery near Newport, Nebraska. In lieu of flowers, memorials were suggested to the Rock County Hospital, the Sandhills Cancer Fund or to the Donor's Choice in Rick's name.

Richard L. Lingenfelter, 65, passed away February 11, 2015 at his home in rural Bassett, after a four and half year battle with esophageal cancer. Rick was born December 16, 1949 to William and Wanda (Vargason) Lingenfelter in Ainsworth, Nebraska.... View Obituary & Service Information

The family of Mr. Richard L. "Rick" Lingenfelter created this Life Tributes page to make it easy to share your memories.