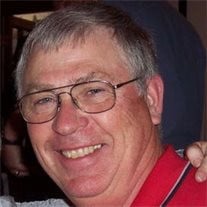 Richard Allen Walters was born May 30, 1947 in O'Neill, Nebraska to Louis and Ruth (Albers) Walters of Chambers. On May 6th, 1967 he married Jolene Cleveland. To this union three children were born; Connie, Cathy and Rich, Jr. On August 10, 1991 he married Judy Jensen. With this union two more children joined the family, Colin and Eileen. Rich grew up milking cows on the family farm in Chambers and working in hayfields for neighbors. He graduated from Chambers High School in 1965. Following graduation from Southeast Nebraska Community College in 1968, he began his 45 year career in the electric utility business. Rich's first employment was with Consumers Public Power District in Lincoln. He held various positions with Consumers and the Nebraska Public Power District in Lincoln, Ainsworth and Geneva. He became the first Office Manager of KBR Rural Public Power District in Ainsworth in 1980. He went on to become KBR's General Manger in 1985, a position he held for twenty-eight years. Beginning in the very early 1980's, Rich was actively involved with wind generation and various wind studies with the Western Area Power Administration and the Nebraska Power Association. He went on to work closely with NPPD and area land owners in the development of the Ainsworth and Springview Wind Facilities. Throughout his career Rich was a part of numerous local, state, regional and national associations, including among others the Nebraska Rural Electric Association, the Nebraska Electric G&T, and the National Rural Electric Cooperative Association. He held many committee assignments in these organizations, both elected and appointed. Rich retired from KBR Rural Public Power District on May 31, 2013 after 45 years in the electric utility industry. Outside of work Rich was very active in a variety of local and state community groups, including the United Methodist Church, Rod and Gun Club, community development groups, Arts Council, Lions Club and the Clear Lake Club. Rich's contributions to those groups are endless. Rich spent countless hours painting and drawing pictures in his younger years and won many local and regional competitions. Later in life Rich could always be seen with a camera around his neck. He loved capturing wildlife and natural scenery in its beauty and also capturing his children's sporting events. Rich was an avid fisherman and bow hunter. He spent many days throughout his life with a fishing rod and reel or with a Bear recurve bow in his hand. Some of his favorite hunting memories were hunting turkey and deer with friends and family on Plum Creek in northern Brown and Rock Counties. Rich loved to fish small ponds throughout Nebraska. In 1984, he purchased a cabin at the Clear Lake Club south of Ainsworth. The lake, club members and cabin became Rich's passion. Most weekends you would find him at the lake. He loved to share his 'paradise' with others. Countless family members and friends have enjoyed a smoked BBQ meal on the deck at the cabin prepared by Rich. Throughout his life filled with numerous work, community events and service to others, Rich's love for family was always present. He and Judy enjoyed traveling and seeking out new dining experiences as well as a fine glass of wine. He could always be found in the stand or sidelines at his children's events wearing his red KBR jacket. One of his greatest joys in life was teaching his grandchildren how to fish and watching them play in the lake. Rich's generosity was endless. He loved to help and give to others and wanted no recognition in return. He was known for his 'open door' and never letting anyone buy him a meal. Rich led his life with a positive outlook and tireless work ethic and strove to impress these on others. Rich was preceded in death by his parents and brother Michael Walters of Chambers. Survivors include his wife Judy Walters of Ainsworth; children Connie Linder and husband John of Minden, Cathy Cook and husband Joe of Belgrade, Rich Walters Jr. and wife Amy of Kearney, Colin Jensen of Omaha, and Eileen Jensen of Ainsworth; nine grandchildren; brother Donald "Boog" Walters and wife Karen of Chambers; and a niece, nephew and other family members. Richard Allen 'Rich' Walters, age 67 died Thursday, September 4, 2014, at his home in Ainsworth. Funeral Services were held on September 9, 2014 at 10:30 AM at the United Methodist Church in Ainsworth, Nebraska with Pastor Eldon Davis and Pastor Bruce Beebout officiating at the services. The special CD selections of "Only Time" by Enya, "I Can Only Imagine" by Mercy Me, and "Home" by Phillip Phillips, were played at the services. The Eulogy and special remarks were shared by Pastor Bruce Beebout. Pallbearers were: Ron Walters, Bob Beatty, Dale Kirkpatrick, Dewey Jefferis, Dale Caskey and Terry McGill. Honorary Bearers were: All the Directors and Employees of KBR Rural Public Power. A 3:00 PM Graveside Service was held at the Chambers Cemetery in Chambers, Nebraska. Memorials were suggested to the CureSearch or CaringBridge Organizations. Hoch Funeral Home of Ainsworth was in charge of the arrangements.

Richard Allen Walters was born May 30, 1947 in O'Neill, Nebraska to Louis and Ruth (Albers) Walters of Chambers. On May 6th, 1967 he married Jolene Cleveland. To this union three children were born; Connie, Cathy and Rich, Jr. On August 10,... View Obituary & Service Information

The family of Mr. Richard Allen "Rich" Walters created this Life Tributes page to make it easy to share your memories.