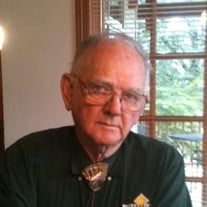 It would be impossible to write in a few short paragraphs all of the accomplishments, activities, businesses, and charitable work this good man squeezed into 93 years. You could not even list the high points of his life, it would take a... View Obituary & Service Information

The family of Mr. Richard L. "Dick" Mauch created this Life Tributes page to make it easy to share your memories.

It would be impossible to write in a few short paragraphs all...