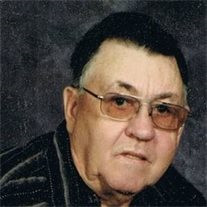 Richard Lee Goochey was born on July 23, 1936 in Duff, Nebraska to Verna Louise Goochey and Francis Rittenhouse at Duff, Nebraska. He passed away on May 1, 2018 at the Sandhills Care Center in Ainsworth, Nebraska. Times were difficult in the 1930's and 40's, so Richard's grandparents, Louie and Hanna Goochey raised him. (Richard always joked that his grandparents raised him on goats milk and that is why he was such a good kid.) Richard attended Ovitt School that was ¼ mile away from his home. His grandmother passed away in 1951, so he went to live with his Uncle and Aunt Chet and Lois Goochey in Ainsworth, where he attended high school for two years. In 1953, Richard moved to Taylor, Nebraska to finish the last two years of high school and graduated in 1955. After graduation, Richard worked for Orle Hughes as a rancher in Rose, Nebraska until entering the service in 1955. Richard proudly served his country in the United States Army at Ft. Chaffe, Arkansas, Fort Lewis, Washington, and the one he was most proud of, overseas at Lodd AFB in Fairbanks, Alaska. Richard was honorably discharged in 1961. In 1960, Richard was united in marriage to Ardith Elaine Jackson. Richard and Ardith were blessed with three children, Daniel Lee, Barbara Lou, and Amy Jo. Seven grandchildren, and six great-grandchildren. Richard and Ardith moved to Ainsworth in 1960, where Richard went to work for Goochey's Appliance until 1965. From 1965-1969, Richard worked for John John Lehn at Phillips 66 which was later sold to Chuck Irwin. From 1969-1999, Richard spent 30 years doing what he loved the most, working for the Ainsworth Irrigation District as a ditch rider bringing water to the farmers. Richard was very proud of his job and always ensured that the farmer's needs were met. (Family would always joke about the many family vacations being missed because of Richard's dedication.) During this time Richard and Ardith also purchased many rental properties that Richard proudly maintained. In Richard's spare time he enjoyed going fishing with anyone that would go. There was always lots of ice fishing since that was a slower time for his work. He also enjoyed going to auctions, looking for arrowheads, spending time with family and going to the local warehouse "AKA, the dump" for hidden treasures. The last four years of Richard's life was spent in the Ainsworth Care Center, the Good Samaritan Society Care Center of Atkinson, and most recently the Sandhills Care Center of Ainsworth, where he brought much joy to many new and old friends. Richard is preceded in death by his mother, Verna, father, Francis, brother, Donnie, and sister Leota. He is survived by his wife Ardith of Ainsworth, son, Daniel Goochey (Carol) of Omaha, Nebraska, two daughters, Barbara Lurz (Jim) of Pender, Nebraska, and Amy Himburg (Michael) of Norfolk, Nebraska; seven grandchildren, six great-grandchildren; three sisters, Betty Morgan of Castana, Iowa, Linda Parr of Battle Creek, Iowa, and Darla Westin of Elk Point, South Dakota; along with numerous nieces, nephews, and other family members and friends. Funeral services were held on May 5, 2018 at the Zion Lutheran Church in Ainsworth with Pastor Georg Williams serving as officiant. CD selections of "Go Rest High On that Mountain" by Vince Gill, and "Grampa" by The Judds. Congregational hymns were, "Old Rugged Cross" and "Jesus Loves Me," with Georgia Williams as accompanist. Pall bearers were, Eddy Daniels, Joe Moody, Jim Lauer, Chuck Irwin, Royce Greder, and Steve Broekemeier. Honorary bearers were, Harlin Welch, Rod Imm, Chet Wilkins, Phil Herrings, Marvin Hart, Brent Johnson, Dan Lentz, and Bonnie Richey. Burial followed at the Ainsworth Cemetery with Military Honors presented by the Ainsworth American Legion Post # 79. In lieu of flowers, memorials were suggested to the family in his name for a future designation.

Richard Lee Goochey was born on July 23, 1936 in Duff, Nebraska to Verna Louise Goochey and Francis Rittenhouse at Duff, Nebraska. He passed away on May 1, 2018 at the Sandhills Care Center in Ainsworth, Nebraska. Times were difficult in the... View Obituary & Service Information

The family of Mr. Richard Lee Goochey created this Life Tributes page to make it easy to share your memories.