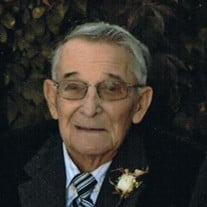 Richard Lee “Dick” Gambill was born to Kyle and Dorothy (Mink) Gambill on March 12, 1936 in Battle Creek, Nebraska. Dick passed away on Monday, January 24, 2022 at the Brown County Hospital in Ainsworth, Nebraska at the age of 85. Dick attended East Emerick Rural School and graduated from Newman Grove High School. After graduating, Dick continued working on the family farm with his father, south of Meadow Grove, Nebraska. Dick was baptized and confirmed into the Lutheran Church in 1957. On June 2, 1957 Dick married Shirley Warneke in Tilden, Nebraska. To this union, two sons were born, Jeff and Brad. The family lived and farmed in the Tilden and Meadow Grove area for over 27 years before moving to the ranch south of Johnstown, Nebraska. Dick gave back to his community by serving on the church and school boards and on the rural fire department. He was avid about hunting and fishing and land conservation. He was preceded in death by his parents, Kyle and Dorothy Gambill; father and mother-in laws, Louie and Freida Warneke. Dick is survived by his wife of 65 years, Shirley Gambill of Johnstown; sons, Jeff Gambill and Brad Gambill of Johnstwn; daughter-in-law, Terri Gambill of Ainsworth; adopted daughter, Janell (Randy) Hart of Ainsworth; four grandsons, Taylor, Lane and wife Kelly, Jake, Tucker and fiancé Lindsey Klingbeil; and two great-grandchildren, Josie and Statler. Memorial Services were held on Monday, January 31, 2022 at the Zion Lutheran Church in Ainsworth with Pastor Bill Serr officiating at the service. The music was provided by Georgia Williams and the Congregational Hymns of, “Amazing Grace”, “Great Is Thy Faithfulness” and “Lord, Dismiss Us With Thy Blessing” were played. Honorary Urn Bearers were: Taylor Gambill, Lane Gambill, Jake Gambill, Tucker Gambill, Kurtis King and Kim Zurcher. A Private Family Inurnment will take place at a later date at the ranch south of Johnstown. Memorials were suggested to the Zion Lutheran Church or to the donor’s choice in Dick’s name.

The family of Richard L. "Dick" Gambill created this Life Tributes page to make it easy to share your memories.