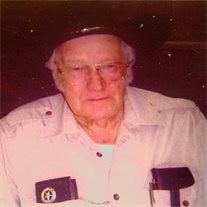 Richard M. "Dick" Reece passed away November 19, 2015 peacefully at his home of 52 years, at the age of 88. He was born February 17, 1927 in Crawford, Nebraska to Reuben and Frances (Kreman) Reece. He was the eldest of three sons. Richard grew up on a ranch south of Crawford and attended school in Harrison, Nebraska, graduating in 1945. Immediately after, he was drafted into the United States Army during WWII where he served from June of 1945 until November of 1946. On May 7, 1950 Richard was married to Susanne Mack of Harrison. To this union four daughters were born, Arlynne (1950), Carolyn (1952), Rosalyn (1954), and Mollee (1969). They continued to live and work in the Crawford Area until moving to Ainsworth in 1963, where Richard became a Government Animal Control Agent. After the program was closed he worked various jobs including, farming and maintenance at the local nursing home before his retirement at the age of 62. Richard enjoyed many hobbies, the first of which was gunsmith work. He belonged to the local Rod and Gun Club and was a member of the NRA. He was an avid hunter and was at home in the outdoors. He was known for his knife making and leather working. He loved spending countless hours in his workshop and always had a project lined up. The local Adopt a Veteran Program by the eighth grade class of Ainsworth Community Schools became a highlight for him in his later years. Dick is preceded in death by his parents Reuben and Frances and brother Frank. He is survived by his wife Susanne of Ainsworth; children Arlynne Reece of Ainsworth; Carolyn and Mike Essink of Waverly, Nebraska; Rosalyn and Jerry Fernau of Ainsworth, and Mollee Reece and Karl Weichman of Kearney, Nebraska; eleven grandchildren, LaNeah and Jairo Orellana, Andrea Dombrowski, Tony Ohmberger, Angela Essink, Nicole Essink, Clint Essink, Richard Fernau, Travis Fernau, Tina Fernau, Tammy Fernau; 14 great-grandchildren, two great-great-grandchildren and many nieces and nephews along with a brother, Jim and Anna Marie Reece of Crawford, Nebraska and plus a special friend Betsy Saner. Funeral services with Military Honors by the Ainsworth American Legion Post #79 were held at Hoch Funeral Home in Ainsworth, Nebraska on November 23, 2015. Dan Woods officiated at the service. Music was provided by Rodney and Tonya Luther singing selections of "Amazing Grace," "Tennessee Waltz," and "Red River Valley." Graveside Services were held on November 24, 2015 at the Glendale Cemetery near Crawford, Nebraska with Military Honors being provided by the Dawes County Veterans Honor Guard. Pastor Dusty Sprague officiated at the committal service. Pallbearers were: All of Dick's Family. Memorials were suggested to the Area Disabled Veterans Programs. Chamberlain Funeral Chapel of Chadron/also assisted with the service arrangements.

Richard M. "Dick" Reece passed away November 19, 2015 peacefully at his home of 52 years, at the age of 88. He was born February 17, 1927 in Crawford, Nebraska to Reuben and Frances (Kreman) Reece. He was the eldest of three sons. Richard grew... View Obituary & Service Information

The family of Mr. Richard M. "Dick" Reece created this Life Tributes page to make it easy to share your memories.