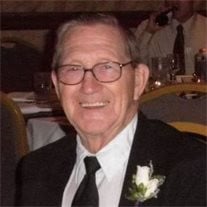 Richard Jay "Dick" Finley completed his earthly journey on December 14, 2013 at the age of 79 at his home in Ainsworth, Nebraska. He was born July 4, 1934, to Oscar Sidwell and Rosa Mae (Brown) Finley near Johnstown, Nebraska, the youngest of nine children he was nicknamed "Dickie". He joined the Army in 1951 and served until he received a medical discharge in late 1952. On December 19, 1952, he married Betty Jean Lucht. This union was blessed with six children. Dick and Betty Jean lived in the Ainsworth and Johnstown area before moving to Idaho where they owned a dairy farm. They returned with their family to Nebraska in 1963 and Dick worked for Farmers Ranchers Co-op. In 1973 Dick and Betty purchased the former Dairy Sweet and operated it as the D & B Café. Betty passed away in July 1977 from cancer. She left behind a letter instructing Dick to bring her sister, Bonnie Jane and four children, back to Ainsworth. She explained that they could be there to support each other and help raise his and her children together. Dick and Bonnie were married October 5, 1977 in O'Neill, Nebraska. His family enlarged to 10 children when he proudly adopted her four children. His family was a top priority and brought him enormous pride and joy. Dick retired from the Co-op with 40 plus years of service to the community. Being a "workaholic", after less than two weeks of retirement he began working for the Brown County Courthouse and Home Health Equipment. On July 12, 2011, he was in a serious accident while making deliveries for Home Health. During his recovery, he was actually able to retire and spend more time with family. He was proud to be an active lifetime member of the American Legion Post #79 and a member of the Elks BPOE 1790. Dick followed Bonnie to many Does conventions and became a true "Bullshipper". He looked forward to traveling to family reunions and events in his beloved RV. The D & B was a huge part of his life where he hosted many family gatherings. The café provided jobs for many family members who learned to cook and serve others. Spending time teaching and playing cribbage, poker and four-point pitch was his passion and he was always out to win. Dick loved to dance, pitch horseshoes, read, garden, fix cars, bicycles, mowers or anything broken. He shared this knowledge with family and friends. Helping and serving others was his way of life and no one was a stranger. He was preceded in death by his parents, his first wife, Betty Jean, a son, Olen Scott, a brother, Dennis, and sisters June Bolich, Viva Dean Fernau, Unadell Smith and Julia Kaup. He is survived by his wife Bonnie and children: LaRene and husband Brent Beebout of Kearney, Nebraska, daughter-in-law, Kathy (Beebout) Finley of Longmont, Colorado, Kim of Ashland, Nebraska, Rick and wife Patty (Beckley) of Ainsworth, Bob and wife Teresa (Sears) of Ft. Worth, Texas, Beccy and husband Mike Assarsson of Warner, South Dakota, Maria of Denver, Colorado, Joe and fiance April Johnson of Ainsworth, Richard L. and fiance Melody Pebley of Grand Island, Nebraska, Scott A. and special friend Kristie Weidner of Ainsworth. 24 grandchildren, including Nathan Finley, who he and Bonnie helped raise, and 24 great-grandchildren. His brother, Lohn and wife Mary Bell of Centennial, Colorado, his sisters, Doriene Fernau of Rupert, Idaho and Mary Ann "Molly" Moore of Ainsworth, and a sister-in-law, Helen Finley of Auburn, Washington and many nieces, nephews, cousins and numerous friends. A Memorial service was held on Dec. 21, 2013 at the Zion Lutheran Church with Pastor Georg Williams officiating over the service. Music was provided by Georgia Williams with selections of "Joy To the World", "Silent Night" and "Away In The Manger". Honorary bearers were Wes Luther, Bee Graff, Kenneth O'Hare, Corby O'Hare, Larry Zeigler, Manford Peters, and all the other Sunday morning D&B card crew. Military Honors were provided by the Ainsworth American Legion Post #79. Internment will be July 4, 2014, at the East Woodlawn Cemetery in Johnstown, Nebraska. Memorials are suggested to the American Legion Post #79 or to the family for future designation. Hoch Funeral Home of Ainsworth was in charge of the arrangements.

Richard Jay "Dick" Finley completed his earthly journey on December 14, 2013 at the age of 79 at his home in Ainsworth, Nebraska. He was born July 4, 1934, to Oscar Sidwell and Rosa Mae (Brown) Finley near Johnstown, Nebraska, the youngest of... View Obituary & Service Information

The family of Mr. Richard J. "Dick" Finley created this Life Tributes page to make it easy to share your memories.