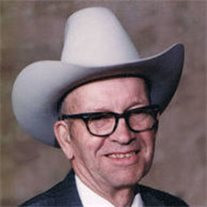 Rex Francis Coleman was born in Arriba, Colorado on March 12, 1919 to Francis S. "Frank" and Sarah "Sadie" (Lucore) Coleman. The family moved to Ainsworth when Rex was three. After graduating from Ainsworth High School, Rex worked several years as a farmhand, before he purchased his farm south of Ainsworth where he both farmed and ranched. On May 21, 1942 he was united in marriage to Ardeth A. Sawle. Rex and Ardeth lived on the farm until retiring to Ainsworth in 1987. In March of 2012 they moved to Columbus to be nearer to their daughter. Rex loved his work and cared for his land as a sacred trust from God, implementing conservation practices as he learned about them. He was heard to say that he wanted to turn the farm over in better condition than he received it. He was progressive in his farm practices, served on the Co-op board and always wanted to pull his weight plus some! Rex had a strong commitment to the church. He served on many committees and as a lay leader. His involvement in the building of the new church during the 1960's included assisting with the construction. Pastor Willis Taplin had shared the vision that a new church could be built on the extra funds gained, if members took a step in faith and increased their giving to a tithe. Rex and others took it to heart. When the debt was retired, Rex was a part of the church's decision to encourage maintaining that level and redirecting the funds to missions. Rex often said that the point that he began tithing marked the time that he began prospering on the farm. Rex and Ardeth rounded out their lives by spending time with family, a time that often included Rex's stories about his life adventures; learning through reading, group bible studies, course work, ie Dale Carnegie class; square dancing, playing cards, bowling, and after retirement, traveling with Rex's siblings and spouses. Rex was a man of integrity, who lived conservatively, but had a generous heart. He loved the Lord, his family, his church, and the community and served them well. A comment the Colemans have grown up hearing about Rex's grandfather was, "There goes John Coleman. He's as honest as the sun." Rex carried on that legacy. Rex is survived by his wife Ardeth of David City, son, Larry Coleman of Harrisburg, PA, daughter, Charlotte Griffith of Columbus, NE; grandchildren Matthew Coleman of Hershey, PA, Tim Coleman of Grand Rapids MI, Joel (Niki) Coleman of York, PA, Stephen Coleman of Harrisburg, PA, Brent (Jessica) Griffith of St. Paul MN and Karen (Mark) Griffith-Dieterich of Bristol RI; 15 great grandchildren; four foster children, Dale (Dorothy) Mapes of Ainsworth, NE, Frank Mapes of Shamokin PA, Sharlene (Kenny) Robinson of Mead, NE, Rhonda (Kevin) Swick of Lincoln, NE and their families, brother-in-law Harry Sawle, sister-in-law Lois Smith, as well as nieces, nephews, cousins, and friends. Rex was preceded in death by parents, Frank and Sadie Coleman, daughter-in-law, Judith Coleman, sister Marjorie French, brother Glen Coleman, sisters and brothers-in-law James French, Margaret Coleman, Doris and Mervin Marsh, Verta Sawle, and infant daughter Linda Mae Coleman. Funeral services were held on February 14, 2013 at the United Methodist Church in Ainsworth, Nebraska with Pastor Eldon Davis officiating over the service. Congregational selections were "Amazing Grace" and "Hymn of Promise" and was accompanied by Sherry Campbell. Special vocal selection of "I Will Rise" by Chris Tomlin was performed by Joel and Stephen Coleman, and Karen Griffith-Dieterich. A special tribute was given by Brent Griffith. Pallbearers were, Brent Griffith, Karen Griffith-Dieterich, Joel Coleman, Stephen Coleman, Dale Mapes, Larry Duden and Keith Baker. Honorary bearers were past members of the United Methodist Church Men's Breakfast Group. Burial was held at the Ainsworth Cemetery under the direction of Hoch Funeral Home of Ainsworth. Memorials were suggested to the Ainsworth Cemetery Association, or to the United Methodist Church.

The family of Rex F. Coleman created this Life Tributes page to make it easy to share your memories.

Rex Francis Coleman was born in Arriba, Colorado on March 12,...