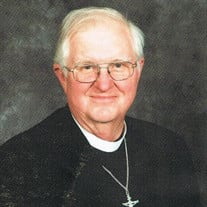 Darl George Williams, Jr. was born on September 5, 1950 in San Angelo, Texas to Darl George and Mary Nell (Davis) Williams, the oldest of four children. He was baptized at Trinity Lutheran Church and attended Trinity Lutheran School. He was confirmed at Calvary Lutheran Church in 1964 and graduated from San Angelo High School in 1968. He received his Bachelor of Arts degree from North Texas State University in 1973. On July 21, 1973 Georg married Georgia Hall in Houston, Texas. To this union one daughter, Rachel Marie was born in 1985. Georg attended Concordia Theological Seminary in Springfield, Illinois and later in Ft. Wayne, Indiana, graduating in 1977 with his Master of Divinity degree. He later also received his Master of Sacred Theology degree. In 1995 he received his PhD from the University of Nebraska at Lincoln. Pastor Williams’ first parishes were Augustana Lutheran Church in Alexandria, Louisiana, and St. Paul Lutheran Church in Mansura, Louisiana. He has been pastor of Zion Lutheran Church in Ainsworth, Nebraska for 42 years. He was a long-time member of the Neligh Study Group of pastors, and for 27 years he was the organizer and host for the Ainsworth Pastors’ Symposium. He served as an adjunct professor at Concordia Theological Seminary in Ft. Wayne, and was a professor at Concordia seminary in Haiti. Pastor Williams entered his eternal life on December 16, 2021 in Kearney, Nebraska after having a heart attack. He was preceded in death by his parents, Darl and Mary Williams; brother, Michael; and father-in-law, Wilmer Hall. He is survived by his wife of 48 years, Georgia of Ainsworth; daughter, Rachel and husband Andrew Hollingsead of Papillion, Nebraska; two grandsons, David and John Hollingsead; sisters, Marie Williams and Claudia and husband Mario Luna of San Angelo, Texas; mother-in-law, Doris Hall of Spring, Texas; sisters-in-law Glenna and husband Rev. Don McLane of Aledo , Texas and Virginia and husband Rev. Stephen Mentz of Bowie, Maryland; brothers-in-law, Gregory Hall and wife Julia of Houston, Texas and Stuart Hall and wife Terri of Vancouver, Washington; and numerous nieces and nephews. Memorial Services were held on Tuesday, December 21, 2021 at the Zion Lutheran Church in Ainsworth with Reverends, Ryan Janke, Dan Feusse, Dave Kuhfal, Terell Huber, Richard Snow and James DeLoach officiating. Music was provided by Betty Bower with the congregation singing, “By Grace I’m Saved”, “Pour Out The Spirit” and “Jesus Christ My Sure Defense.” Inurnment followed in the Zion Lutheran Cemetery. Memorials were suggested to the Zion Lutheran Foundation in care of Zion Lutheran Church of Ainsworth, Nebraska.

The family of Reverend Georg Williams created this Life Tributes page to make it easy to share your memories.