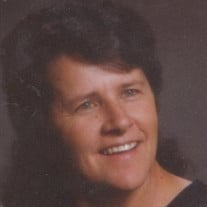 Rena Joyce (Jones) Cathey, 73, of Amarillo Texas, joined her Lord and Savior on May 25, 2019. Rena was born in Ainsworth, Nebraska on June 18, 1945 to Merle and Lois (Bejot) Jones. Rena grew up on the family farm there with two brothers and a sister. She attended Chadron State College in Nebraska. After attending for a year, she moved to South Dakota where she worked at an ammunition depot. Upon leaving there, she worked for a rancher where she sheared sheep. Her life was quite an adventure. Following her job as a sheep shearer, she went to work at Powder & Diz Cattle Company. While working there, she met Jack Cathey. Rena and Jack got married and moved to Oshkosh, Nebraska. That is where their first child, Honey was born in 1975; then it was off to Texas where she worked at several feedlots from Dalhart, Cactus and Spearman. Along came their second child, Joshua, in 1977. In 1989, she went to work at a nursing home in Spearman and decided to further her education in order to become an LVN. She worked at several nursing homes in the panhandle including some in Spearman, Stratford, Guymon and Amarillo until she retired in 2010. Rena never came across a horse she couldn’t break or a calf that she couldn’t help heal. She never met a stranger, even if it was a hitch hiker. She had a huge heart. She loved her family, her horses and her dogs. She was preceded in death by her parents, Merle and Lois Jones and two brothers David and Kenneth Jones. Those left to cherish her memory are her sister, Lila Jones of Amarillo; two sisters-in-law, Carol Jones and Carolyn Jones, of Nebraska; her children, Honey Coleman of Amarillo and Josh Cathey and wife, Wendy of Panhandle; her grandchildren, Chelsea Tucker, Nathan Tucker and wife, BreAnna, Corbin Tucker, Madilyn Cathey and Avery Cathey. She is also survived by great-grandchildren, Jayvien Scott and Noah Tucker. A Celebration of Life Service was held on Friday, May 31, 2019 in LaGrone-Blackburn-Shaw Coulter Road Chapel. In Amarillo and additional services were then held on June 3, 2019 at Hoch Funeral Home in Ainsworth, Nebraska with Pastor Mick Thornton officiating. Special CD selections of “Strawberry Roan” by Marty Robbins, “Lead Me Home” by Jamey Johnson, and “Let Her Fly” by Dolly Parton, Loretta Lynn, and Tammy Wynette was provided. The Eulogy was given by son, Josh Cathey. Pallbearers were Shane Jones, Darian Jones, David Kackmeister, Willie Kackmesiter, Tom Jones and Nathan Tucker and Madilyn Cathey. Interment followed at the Ainsworth Cemetery, with a poem read by daughter, Honey Coleman. In lieu of flowers, the family suggested donations to be made to the Buffalo Flats Cemetery. In lieu of flowers, memorial donations are suggested to the Buffalo Flats Cemetery. More information will be added as received.

Rena Joyce (Jones) Cathey, 73, of Amarillo Texas, joined her Lord and Savior on May 25, 2019. Rena was born in Ainsworth, Nebraska on June 18, 1945 to Merle and Lois (Bejot) Jones. Rena grew up on the family farm there with two brothers... View Obituary & Service Information

The family of Ms Rena J Cathey created this Life Tributes page to make it easy to share your memories.