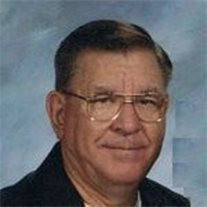 August 16, 1940, Raymond James Stenka was born to his parents, Theodore and Anna (Eurek) Stenka, in Loup City, Nebraska. He was blessed to have an older sister, Rose (Mroczek), and two younger sisters, Marge (Moore) and Julie (Gentleman). He graduated from Loup City High School in 1958 and joined the U.S. Navy in order to meet his military requirement. His six year military career started with basic training in San Diego, California and took him to Litchfield Park Naval Air Station in Arizona then on to Jacksonville, Florida for Aviation Electricians School. He was then transferred to NAS at Agana, Guam. Of this experience, he would later recall, "It was 85 degrees day and night, even when it rained, so spare time was spent swimming in the ocean." Aboard aircraft carriers, he traveled parts of the world including Hawaii, Okinawa, the Philippines, Japan, Hong Kong and Iwo Jima. He would describe this as "a million dollar experience, but "he" would not like to do it again." His duties included operating electronic countermeasure equipment, searching for foreign boats, subs or "whatever we could find," and working with U.S. ships in attempt to jam fire control radar. While military life took him far and wide, when he was discharged from active duty in August of 1961, he returned to Loup City and met the blue-eyed country girl, Georgene "Jean" Gappa in 1962. She lived up the road near the town of Ashton, Nebraska. After a couple rejections (as Ray told the story,) Jean finally accepted his hand in marriage. Through the holy sacrament of marriage, they were wed on October 5th, 1963 in Paplin, Nebraska. To this union, 5 sons and 2 daughters were born. That same year Raymond began working at the Sherman County ASCS Office. Six years later he was promoted to County Office Manager at the Brown, Keya Paha, and Rock County ASCS Office in Ainsworth, Nebraska. 1991 brought the position of District Director, and left Ray overseeing the work of 21 counties. He retired from the USDA in 1994 after a total of 35 years of Federal Service. For part time work, and to help satisfy his love for yard work, he started Ray's Lawn Sprinkler business in 1990. Five years later, after retirement, he stepped it up to full time and continued this line of work right up until the end of 2012. Other activities and hobbies Ray was involved in included; Cub Scout Leader, Member of the Sandhill Rod & Gun Club, St. Pius X Parish Council member, and an active church member. He enjoyed computers, fishing, hunting and spending time with family. He was residing in Ainsworth with his wife, Jean, and canine companion, Pepper. His brief battle with cancer took him to Sioux Falls for medical care and it was at Dougherty Hospice House on Sunday, April 7th , 2013 that his body lost the battle of cancer, but his spirit won the freedom to join his parents, Theodore and Anna Stenka, his daughter, Rae Jean and the many other loved ones whom preceded him. Surviving include his wife, Jean; Sons, Kelly of Valentine, Nebraska, Kurt & his wife Janis of Alma, Nebraska, Kenneth & his wife Kimberly of Atkinson, Nebraska, Scott & his wife Cathy of Lincoln, Nebraska; Daughter, Sheri & her husband Luca Papini of Sioux Falls, South Dakota; and youngest son Mark & his wife Stacy of Lincoln, Nebraska. Also surviving are 15 grandchildren and 5 great-grandchildren. Raymond James Stenka was 72 years old at the time of his death. A Rosary Prayer Service was held on April 11, 2013 at Hoch Funeral Home in Ainsworth, Nebraska, with funeral services being held on April 12, 2013 at the St. Pius X Catholic Church in Ainsworth. Celebrant was, Father Jim Heithoff and assisting, Father Jim Murphy. Music was provided by Nichole Flynn & DeAnn Morse with song selections of "Here I Am Lord", "Ave Marie", "Be Not Afraid" and "On Eagle's Wings". Casket bearers were, Jacob Stenka, Joshua Stenka, Jon Stenka, Michael Stenka, Anthony Stenka Theo Stenka and Andy Chelewski. Honorary bearers were all of Ray's other family and friends. Altar server was Jason Stenka. The obituary was given by Kimberly Stenka. Burial was in the Ainsworth Cemetery under the direction of Hoch Funeral Home of Ainsworth. Memorials were suggested to the family in his name for future designation.

August 16, 1940, Raymond James Stenka was born to his parents, Theodore and Anna (Eurek) Stenka, in Loup City, Nebraska. He was blessed to have an older sister, Rose (Mroczek), and two younger sisters, Marge (Moore) and Julie (Gentleman). He... View Obituary & Service Information

The family of Mr. Raymond James "Ray" Stenka created this Life Tributes page to make it easy to share your memories.