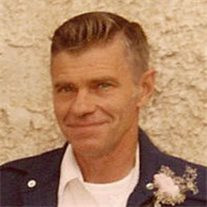 Raymond L. (Ray) Denny was born to Gale and Mila (Hollopeter) Denny on June 13, 1938 in Palisade, Colorado. Then his family moved back south of Ainsworth, Nebraska. Eventually they bought a place south of Long Pine, Nebraska where he attended school. He would always tell the story about him and his sister riding a horse to school. As soon as they were out of sight, she would jump off because she was scared of the horse. When Ray was in school, he would take the distributor cap off the teacher's car and charge him a dollar to fix it. He attended high school in Ainsworth. He was drafted into the United States Army, and was inducted September 1961, with an honorable discharge in October 1962. After returning home from the service, he started work at the Snyder Company in Ainsworth. Then he began working for Charles Turner. Ray married Lillian McKenney on June 2, 1968 in Newport, Nebraska. They had five daughters: Lori, Sherry, Patsy, RaeDean, and Melissa. The family moved to Omaha for a couple years and decided to move back to Newport and started Denny Construction. He had several different people work for him. Later on Vince and Melissa started working with him. He would do everything from remodeling to building houses. There was nothing he couldn't build. He was a hard worker that would keep going from morning until night. Ray also liked to make gag gifts, especially for Lillian's Aunt Harriet. He was a generous person that was always helping out in the community, such as removing snow for neighbors with his loader. He enjoyed wood working and carpentering until he had to retire for health reasons. Ray loved his family, but also had a special place in his heart for his cattle and pigs. He enjoyed helping with the family business, "Sandhill's Puppy Paws." You would always see him with some kind of a four legged pet. His latest companion was a stray poodle named Pearl. You would find him and Pearl riding the four-wheeler all over town and also seen driving around visiting neighbors. You could always find him taking a nap with Toka, Pearl, and usually a fat cat. He later discovered how to use the computer. You would find him shopping on Ebay, searching for vehicles, tractors, and four-wheelers, always looking for a good deal. Christmas was his favorite holiday when the whole family would get together. He always had a great big smile and a twinkle in his eye while opening presents. Ray knew no stranger. He was always giving a helping hand to anyone in need, whether it was a hot meal or a ride. He liked to visit and have a good, strong cup of cowboy coffee around the kitchen table. Ray passed away at the Rock County Hospital at the age of 75. He will be missed by his family and friends. He is survived by his wife, Lillian; five daughters Lori Morrow and husband Rick of Bassett, Nebraska, Sherry Pohlman and husband Scott of Davey, Nebraska, Patsy Strand of North Platte, Nebraska, RaeDean Caldwell and husband Vince and Melissa Denny all of Newport and special friend Shawn Reynolds of Bassett; brothers Don Denny and Garry Denny and wife Naomi of Ainsworth and a sister, Shirley Beasley and husband Dan of Lancaster, California; nine grandchildren and eight great grandchildren; brother-in-law Lewis McKenney and wife Judie of Hay Springs, Nebraska; sister-in-law Lorraine Sidak of Mesa, Arizona; and many nieces, nephews, and other family members. He was preceded in death by his parents, a grandson, and a great grandson. Memorial Services were held on Wednesday, April 16, 2014 at the United Methodist Church in Bassett with Pastors Rod Heilbrun and Gary Graesser officiating. Inurnment was in the Newport Cemetery with a Military Flag Presentation by Newport American Legion Post #227. A Video Presentation created by granddaughter, Brittany Caldwell was shown with the songs, "Daddy's Hands," "When I Get Where I'm Going," and "I'm Already There." Memorials were suggested to the family in his name for future designation. Online Condolences can be made to the family at: www.hochfuneralhome.com.

Raymond L. (Ray) Denny was born to Gale and Mila (Hollopeter) Denny on June 13, 1938 in Palisade, Colorado. Then his family moved back south of Ainsworth, Nebraska. Eventually they bought a place south of Long Pine, Nebraska where he attended... View Obituary & Service Information

The family of Mr. Raymond L. "Ray" Denny created this Life Tributes page to make it easy to share your memories.