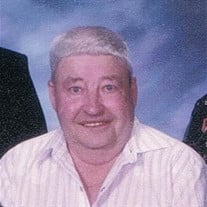 Raymond Edward Norton was born on the family homestead north of Stuart, NE on January 19, 1933 to Asa E. and Lucy A. (Wilcox) Norton. He was the oldest of 13 children. Ray graduated from Stuart High School in 1950. He served in the United States Army from April 3, 1951 through April 2, 1954 during the Korean War. When he returned from the service, he worked at various ranches. Ray married Nedra M. Weber on May 28, 1956 at Atkinson, NE. To this union, four children were born: Robert, Marcia, Todd and Michael. Ray and Nedra and family lived north of Newport, NE for awhile and later moved south of Long Pine, NE where he started his own ranching and dairy farm. In 1976, they moved to Ainsworth, NE where he worked for the City of Ainsworth as a garbage man. He retired at age 65 in 1998. After retirement, he enjoyed fishing, repairing bicycles and mostly just being with his family. Ray was preceded in death by his parents; and wife Nedra who passed away July 20, 2014; and five siblings, James, Eugene, Richard, Larry Norton and Norma Peterson. He leaves to mourn his passing his four children: Robert (Janet) Norton of Valentine, NE, Marcia (Scott) Menish of O’Neill, NE, Todd (Cindy) Norton of Rose, NE and Michael (Jeanie) Norton of Ainsworth; eight grandchildren; 15 great-grandchildren; three brothers, Don Norton of Stuart, Dean Norton of Glen Rock, WY, Robert (Marietta) Norton of Stuart; four sisters, Mary (Frank) Obermire of Cassville, MO, Gladys Norton of Columbus, NE, Joyce Murphy of Snohomish, WA and Karen (Dan) Kallhoff of Pilger, NE; along with numerous nieces, nephews and other family members. Ray passed away on Sunday, April 17, 2022 at the West Holt Memorial Hospital in Atkinson at the age of 89 years, two months and 29 days. Funeral Services were held on Thursday, April 21, 2022 at the Hoch Funeral Home in Ainsworth with Pastor Wayne Owens officiating. The CD selections of “In The Garden” and “Old Rugged Cross” by Alan Jackson were played. A Eulogy was given by Ashley (Norton) Thompson. Casket Bearers were: Travis Menish, Dale Lindquist, Casey Norton, Banning Norton, Joey Neidhardt and Christopher Norton. Honorary Casketbearers were: All of Ray’s Other Grandchildren and Great-Grandchildren. Interment was in the Ainsworth Cemetery with Military Honors by Ainsworth American Legion Post#79. Memorials were suggested to the family in Ray’s name. Online condolences may be left for the family at www.hochfuneralhome.com.

Raymond Edward Norton was born on the family homestead north of Stuart, NE on January 19, 1933 to Asa E. and Lucy A. (Wilcox) Norton. He was the oldest of 13 children. Ray graduated from Stuart High School in 1950. He served in the United... View Obituary & Service Information

The family of Raymond E. Norton created this Life Tributes page to make it easy to share your memories.

Raymond Edward Norton was born on the family homestead north...