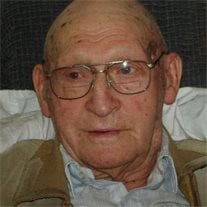 Raymond Melvin "Dick" Wait was born on August 9, 1920 to James Franklin and Alvera Irene (Hall) at Broken Bow, NE. He passed away on August 19, 2015 at the Golden Living Center in Cozad, NE. He grew up on a farm in Brown County and graduated from high school in 1939. On March 24, 1940, he was united in marriage to Velma Marie Wait. He enlisted in the Navy and was honorably discharged when the war ended in 1946. Dick and Marie spent most of their lives in or around Ainsworth. Dick held many jobs including farming, dairy farming, meat cutting, ranching, and truck driving. He retired from Petrolane LP Gas in 1984. After retiring, Dick was active with the baseball program in Ainsworth for a number of years. He also enjoyed competing in horseshoe tournaments and was voted "Man of the Year" by the Ainsworth Horseshoe Club in 1996. He was also named "Man of the Year" by the American Legion in 2001 and was a member of the United Methodist Church for 78 years. Dick was an avid sports fan and was one of the players from the 1938 Ainsworth High School basketball team, which was runner up to the state championship title. He continued his enthusiasm for Ainsworth High School sports his entire life and rarely missed a game home or away until his health would not allow him to attend games. One of his most valued possessions was a basketball, which was autographed by the 2007 State Champion team, the Ainsworth Bulldogs, and presented to him in appreciation for his support over the years. Dick is survived by daughters, Karole Pokorny, Gothenburg, Jan Ammon (Tucker) of Brighton, CO, Donna (Jeff) Morris, Gothenburg, and son Jim (Valerie) of Longmont, CO; ten grandchildren: Jim Pokorny, Bob Pokorny, Kim Davis, Stacie Borrousch, Scott Ammon, Kristyn Morris, Aaron Wait, Nathan Wait, Blair Turner, Taylor Dunlop; and 13 great grandchildren. He was preceded in death by his wife, Marie; his parents, James and Vera; stepfather, Vic Nelson; and sister Olive Patience Young. Funeral services were held on August 24, 2015 at the United Methodist Church in Ainsworth, Nebraska with Pastor David Randall officiating the service. Music was provided by Sherry Campbell. Special CD selections of "How Great Thou Art" by Martina McBride, "Go Rest High on that Mountain" by Vince Gill and "Happy Trails" by Roy Rogers & Dale Evans were provided. The congregational selection was "Amazing Grace." Pallbearers were members of the Ainsworth American Legion Post #79 and they also presented the Military Honors at Ainsworth Cemetery. Arrangements were handled by Hoch Funeral Home of Ainsworth. Memorials were suggested to the Ainsworth American Legion Post #79.

Raymond Melvin "Dick" Wait was born on August 9, 1920 to James Franklin and Alvera Irene (Hall) at Broken Bow, NE. He passed away on August 19, 2015 at the Golden Living Center in Cozad, NE. He grew up on a farm in Brown County and graduated... View Obituary & Service Information

The family of Mr. Raymond M. "Dick" Wait created this Life Tributes page to make it easy to share your memories.