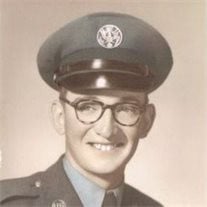 Raymond Dale Davis of Ainsworth, Nebraska was born November 19, 1933 in Long Pine, Nebraska to Clarence and Lola Davis. He passed away in the Brown County Hospital on February 21, 2015 at the age of 81. Ray grew up in the Ainsworth area and after graduating from Ainsworth High School in 1951, he enlisted in the United States Air Force in 1953. He was stationed at March Air Force Base in Riverside, California, serving time in England during the Korean War, and was honorably discharged in 1957. On April 16, 1955, he was united in marriage to Shirley Mae Edwards. To this union two daughters were born. In 1957, after Ray left the service, they returned to Ainsworth. His love of farming took him through several jobs in the Ainsworth area. In 1984, Ray and Shirley purchased and ran the Davis Cleaners until their retirement. Ray was a member of the American Legion and the Ainsworth Congregational Church. Ray was preceded in death by his parents and sister Evelyn. He is survived by his wife, Shirley; daughters Rhonda (Bill) See of Ainsworth, and Nadine (Rick) Little of Omaha, Nebraska. Grandsons, Bradly and Brent See and Tyler and Troy Little. One Great-Granddaughter, Julie Wilhite. Other survivors include sisters, Betty (Lyle) Stewart of Ainsworth, Janice (Joe) Dillon of Glen Rock, Wyoming; one brother, Ralph (Mary Lou) Davis of Ainsworth; one sister-in-law, Ruby Pinhero, and many nieces and nephews. Memorial Services were held on Wednesday, February 25th, 2015 at the Congregational United Church of Christ with Pastor Neva Murphy officiating. Music was provided by Drew Klatt and Linda Tuttle. Honorary Bearers were grandsons, Bradly See, Brent See, Tyler Little and Troy Little. Military honors were provided by the Ainsworth American Legion Post #79. Inurnment will be held at a later date at the East. Park Cemetery. Hoch Funeral Homes of Ainsworth was in charge of the arrangements. In lieu of flowers, memorials were suggested to the family in his name for a future designation.

Raymond Dale Davis of Ainsworth, Nebraska was born November 19, 1933 in Long Pine, Nebraska to Clarence and Lola Davis. He passed away in the Brown County Hospital on February 21, 2015 at the age of 81. Ray grew up in the Ainsworth area and... View Obituary & Service Information

The family of Raymond D. Davis created this Life Tributes page to make it easy to share your memories.