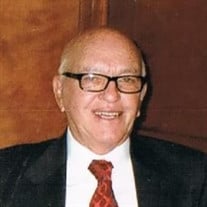 Raymond Henry Davis was born in Brown County on October 7, 1924 to Henry (Bud) and Lena (Seier) Davis. He passed away at the age of 96 on December 10, 2020 at the Rock County Hospital from Covid-19. Raymond grew up in Rock County with four sisters-Grace, Esther, Lucille and Darlene. He attended rural grade school and graduated from Rock County High School. After graduation Raymond was drafted into the Army during WWII. Before leaving he married Margaret Ina Foxworthy. They left for Arkansas where Raymond did his basic training. Margaret returned home when Raymond left for the Philippines to finish his tour of duty in Japan. He was honorably discharged in 1946. Shortly after returning home to his wife and daughter Sharon Rae he began his career in farming north of Newport, Nebraska. His son Danny Kay and daughter Connie Lynn completed their family. Raymond worked from sunrise to sunset growing corn, oats and alfalfa. He milked cows and raised cattle, hogs and chickens. Over the years Raymond leased land for haying and built a herd of Hereford cattle and later added the angus breed. While living on the farm Raymond was a 4-H leader, member of the Farmer’s Co-op and the American Legion. Raymond’s goal was that each of his children had an opportunity for a college education. Sharon became an elementary teacher, Dan a stockbroker and Connie a registered nurse. Once that was accomplished Raymond and Margaret built a home in Bassett. They bought a cabin in Hidden Paradise and began traveling. They visited 48 states, seven countries in Europe and Central America. They also enjoyed numerous cruises. While home in between tours they learned to square dance. That was 10 years of fun. For the past 30 years they have spent their winters in the Rio Grande Valley in Texas. Raymond loved being able to bike, garden, visit with neighbors and attend the parties in the park. He enjoyed playing cards and dancing. Going to Mexico to eat, dance and shop was a highlight. In the summer they spent most of their time at Hidden Paradise in Long Pine, Nebraska. This is a place they loved and enjoyed every summer for the past 40 years. Spending time with their friends and neighbors at a place they loved was and has been a true blessing. Raymond was preceded in death by his parents, Bud and Lena; sisters, Esther Woods, Lucille Whitmere and Darlene Pavelka; and son-in-law, Gerald Bussinger. Raymond was a devoted and loving husband and father. Left to mourn his passing is his beloved wife Margaret of 76 years; sister, Grace Holcomb of Austin, Texas; three children, Sharon Bussinger of Bassett, Nebraska, Dan (Nancy) Davis of Omaha, Nebraska, and Connie Davis (Charlie Williams) of Pine, Colorado; four grandchildren, Jeffrey (Kim) Hunting and Matthew (Brooke) Hunting all of Omaha, Nebraska, Keegan (Jen) Davis of Clearwater, Florida, and Shellayne (James) Burkhart of Austin, Texas; five great-grandchildren, Jordyn Hunting of Severance, Colorado, Taylor Davis of Omaha, Nebraska, Olivia Davis of Clearwater, Florida, Sofia Collette and Andrew Burkhart of Austin, Texas; and a host of friends and family members. A private family graveside service was held on December 16, 2020 at the Bassett Memorial Park Cemetery officiated by Pastor Jenice Epp. Full Military Honors were conducted by the Bassett American Legion Post #123. Casket Bearers were: Dan Davis, Taylor Davis, Charlie Williams, Jim Keller, Stan Weidner and Rick Steskal. Memorials were suggested to the family in Raymond’s name for future designation.

Raymond Henry Davis was born in Brown County on October 7, 1924 to Henry (Bud) and Lena (Seier) Davis. He passed away at the age of 96 on December 10, 2020 at the Rock County Hospital from Covid-19. Raymond grew up in Rock County with four... View Obituary & Service Information

The family of Raymond Henry Davis created this Life Tributes page to make it easy to share your memories.