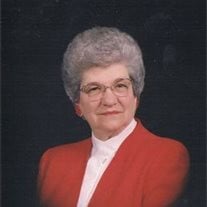 Ramona Jean Ludemann was born, January 1, 1929 to Walter and Caroline (Haman) Ludemann near Mills, Nebraska. She passed away on January 2, 2015 at the Ainsworth Care Center at the age of 86 years and one day. Ramona attended country school in Mills and graduated from Keya Paha High School in Springview, Nebraska in 1945. She married Darrell Carr on January 5, 1947 in Springview. Two sons, Steven and Bill were born to this union. Ramona was employed for over 30 years at the Nebraska Department of Roads in Ainsworth. Her greatest focus in life, however, was always her family. She loved her role as a wife, mother, and later, grandmother and great-grandmother. She was an excellent cook and also enjoyed traveling, attending family reunions, playing cards and working crossword puzzles. She was a member of the DOES, the American Legion Auxiliary and the Congregational United Church of Christ. Ramona was preceded in death by her parents; her husband, Darrell; and a brother, Ward Ludemann. She is survived by her sons, Steven (Karen) Carr of Lincoln, Nebraska and Bill (Gerry) Carr of Ainsworth; granddaughters, Mikayla (Jon) Spangler of Omaha, Nebraska, Jessica (Benji) Berg of Ft. Collins, Colorado and Lanay (Jared) Hansmeyer of Long Pine, Nebraska; grandsons, Jeffery (Betsy) Carr of Lincoln, and Lane Carr of Whitesburg, Kentucky; great-grandchildren, Ruvani Spangler, Blake Hansmeyer, Barrett Spangler and Joel Carr; a sister, Donna Vroegh of Eddyville, Iowa; and brothers, Carl (Donna) Ludemann of Naper, Nebraska, John Ludemann of St. Paul, Nebraska and Bernie (Carol) Ludemann of North Platte, Nebraska, along with many nieces, nephews and other family members. Funeral services were held on January 5, 2015 at the Congregational United Church of Christ with Pastor Neva Murphy officiating at the service. A Special CD Selection of "Amazing Grace" by the Statler Brothers was provided. Music was provided by Sherry Campbell. Congregational selections of "Be Thou My Vision" and "God Be With You Til We Meet Again" were also provided. Pallbearers were Lane Carr, Jeff Carr, Benji Berg, Jon Spangler and Jared Hansmeyer. Burial was held at the Ainsworth Cemetery under the direction of Hoch Funeral Home of Ainsworth. Memorials were directed to the Congregational United Church of Christ, the Aseracare Hospice Program or to the donor's choice.

Ramona Jean Ludemann was born, January 1, 1929 to Walter and Caroline (Haman) Ludemann near Mills, Nebraska. She passed away on January 2, 2015 at the Ainsworth Care Center at the age of 86 years and one day. Ramona attended country school... View Obituary & Service Information

The family of Mrs. Ramona Jean (Ludemann) Carr created this Life Tributes page to make it easy to share your memories.