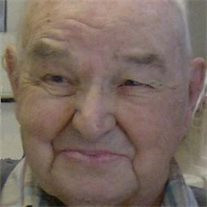 Raleigh Richmond Ripley Raleigh was born on February 15, 1917 in Springview, Nebraska to William E. Ripley and Linna (Whitehead) Ripley and passed away at the Winner Regional Healthcare Center on March 19, 2014. Raleigh was the third of four children. He spent his childhood in Springview and graduated from Keya Paha County High School in 1934. He attended Wesleyan University of Lincoln and graduated with a Degree in Economics in 1939. He played guard on the varsity football team for 2 ½ years, and was on the track team. Raleigh enlisted in the United States Army on January 28, 1941. He served 18 months as an enlisted man in the U. S. Cavalry. He attended Officer Candidate School and was commissioned as 2nd Lieutenant on August 14, 1942. He served two years in the European Theater from 1943-1945 as a truck officer. He participated in Normandy, N. France, Ardennes, Rhineland and Central Europe Campaigns. He received the European African Middle Eastern Service Medal, the American Campaign Medal, the American Defense Medal, the World War II Victory Medal, and the Army of Occupation Medal. He retired from active duty as Captain on February 8, 1946. Raleigh served in the reserves and retired August 16, 1949 with the rank of Major. He returned to Springview to become a partner in the family Chevrolet business. He served as Commander, Adjutant and Service Officer of American Legion, He also coached High School Football, and Junior Legion Baseball, and was a member of the Volunteer Fire Department, and he also was elected and served as Chairman of the Village Board of Trustees. Raleigh moved to Denver, Colorado in the early 1950's where he was employed by the United Postal Service. While in Denver, he married Byrle Gierau in June of 1957. They both retired from their jobs and moved to Springview in 1977. Following the death of his wife in 1988, he remained in their home in Springview until the summer of 1995 when he moved to Payson, Arizona. He later returned to Springview in November of 2003, where he remained until he became a resident of the Winner Regional Healthcare Center until his passing. Raleigh was a member of the Shriners, the Elks, a Mason since 1945, and a 70- year member of the American Legion. He was a proud veteran, an avid hunter, fisherman, bowler, and golfer. He enjoyed spending time with his family, telling stories, and was often seen walking along the highway swinging his cane. He will be greatly missed by his family and friends. Raleigh is preceded in death by his wife Byrle, parents, sister Jeanne Krause, brothers Ceile W. and William E., Jr. He is survived by many nieces, nephews and other family members. Memorial Services were held at 10:00 AM Friday, June 27, 2014 at United Methodist Church in Springview with Pastor Rod Heilbrun officiating. Masonic Rites were conducted by Silver Cord Lodge #224 AF&AM. Music was provided by Sharon Kienke with the congregation to sing "The Old Rugged Cross. Inurnment with Military Honors by Springview American Legion Post #98 followed at the Mt. Hope Cemetery at Springview. Memorials are to be made to Springview American Legion Post #98, or to the Keya Paha County Activity Center at Springview. Hoch Funeral Home of Ainsworth wass entrusted with the funeral arrangements.

Raleigh Richmond Ripley Raleigh was born on February 15, 1917 in Springview, Nebraska to William E. Ripley and Linna (Whitehead) Ripley and passed away at the Winner Regional Healthcare Center on March 19, 2014. Raleigh was the third of four... View Obituary & Service Information

The family of Mr. Raleigh R. Ripley created this Life Tributes page to make it easy to share your memories.