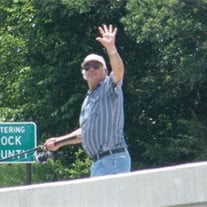 Vonald Ray Bartlett was born at home in Riverview, Nebraska along with his older twin Victor, to Fritz and Ida (Gordon) Bartlett on November 3rd, 1939. They were the 7th and 8th children out of a total of eleven.He grew up on a farm learning that everyone worked together and no job was to menial. When the Bartletts' got together you could be sure of one thing, music would be a part of the fun. At an early age Von taught himself how to play several different instruments, which included the fiddle, piano, guitar, autoharp, steel guitar, mandolin and accordion. Von held several different jobs as a young man eventually becoming a "jack of all trades." He helped with the construction of the Catholic and Presbyterian churches in Valentine, the school in Spencer and the bank in Neligh. He married the love of his life, Marcella "Mick" K. Dillon on April 29th, 1963. To this union one daughter, Lori Lee was born on Oct. 18th, 1964. Von and Mick moved quite often during their first years together following construction work. They finally settled in Bassett, Nebraska in 1970. Von started working for KN Energy in 1974. He transferred up to Gordon, Nebraska in 1983 and retired from there in 1995. They returned to Bassett in 1997 and he continued working at a cattle yard and then as a maintenance man at the Rock County Hospital where Marcella had taken a job at the Long Term Care. Von enjoyed many activities during his life. One of the most important that he shared with his family was fishing. He had many favorite fishing holes that he could often be found at. There was usually a lot of driving involved, as he would start north of Bassett or Ainsworth and end up clear down to the Calamus River in a single day, stopping to try any spots along the way. He was also a volunteer fireman and city officer for many years. Von enjoyed having family and friends come to visit and was a gracious host making sure everyone had plenty to eat and drink and of course lots of laughter. His greatest pleasure was spending time with his grandchildren, great-grandchildren and his dogs Minnie and Karrie. A person always knew if they needed help or to borrow any thing he would be the first to offer his own. Von will be fondly remembered by his friends and family, for his love of music, and all the good times spent playing together no matter the occasion. Vonald passed away on March 11, 2015 at the CHI Health Nebraska Heart Hospital in Lincoln, Nebraska. He was preceded in death by his parents, Fritz and Ida, wife of 49 years, Marcella "Mick"; brothers, Milo, Glen, and Victor; sister, Verta Sawle and niece Cindy Koch. Brothers-in-law, Clayton Sharp, Kenny Densberger, Jack Dillon, and Larry Dillon; Sister-in-law, Ruth "Frankie" Hulshizer, and nephew David Dillon. Left to mourn his passing will be daughter, Lori Lee and husband Todd of Hugoton, Kansas; granddaughters, Lacey (Trent) Kurts also of Hugoton, Lindsey Lissolo of Ulysses, Kansas and grandson Colten Lissolo of Hugoton. Great-granddaughters Madison and Mackenzie Kurts and great- grandson Landyn Araiza. Brothers, Loice (Mary) Bartlett of Chadron, Nebraska, Dean (Emily) Bartlett of David City, Nebraska, and Denny (Marie) Bartlett of Lakewood, Colorado. Sisters, Vada (Dave) Haumann of Thedford, Nebraska, Vivian Sharp of Muscatine Iowa, and Vernal Densberger of Shamrock, Texas. Sisters-in-law, Norma Bartlett of Valentine, Nebraska, Helen Bartlett of Bassett, Ellie Zahradnicek of Long Pine, Nebraska, Bobbi Hempel of Bassett, Judy (Orven) Huishizer of Milton, Florida, Milinda (Ken) Turpin of Newport, Nebraska. Brothers-in-law, Harry Sawle of Ainsworth, Nebraska, Jerry (Nona) Dillon of Janesville, Wisconsin, and Jonas (Carolyn) Dillon of Bassett. Numerous nieces and nephews and other family members. Funeral services were held at Hoch Funeral Home in Ainsworth, Nebraska with Pastor Eldon Davis officiating the service and Pastor Dennis Quigley officiating at the cemetery. CD selections of "When I Get Where I'm Going" by Brad Paisley and Dolly Parton, "Daddy's Hands" by Holly Dunn, and "Go Rest High On That Mountain" by Vince Gill were provided along with a special CD selection of "Great Speckled Bird" recorded by Von & Vic Bartlett. Pallbearers were, Reno Dean Gordon, Garrett Weidner, Stan Weidner, Rocky Sharp, Cameron Koch and Keith Wright. Honorary bearers were all of Von's other family and friends. Interment and burial of cremains for both Vonald and his wife Marcella (who had passed away on January 31, 2013) was held at the East Park Cemetery at Ainsworth, Nebraska. Memorials were directed to the Vonald and Marcella Bartlett Memorial Scholarship Fund.

Vonald Ray Bartlett was born at home in Riverview, Nebraska along with his older twin Victor, to Fritz and Ida (Gordon) Bartlett on November 3rd, 1939. They were the 7th and 8th children out of a total of eleven.He grew up on a farm learning... View Obituary & Service Information

The family of Mr. Vonald R. Bartlett created this Life Tributes page to make it easy to share your memories.

Vonald Ray Bartlett was born at home in Riverview, Nebraska along...