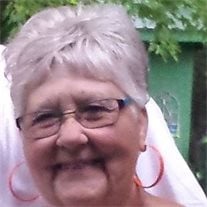 Phyllis A. Lane was born on November 3, 1945 in Spooner, Wisconsin, and passed away in the Rock County Hospital at Bassett, Nebraska on August 2, 2015. (Instead of a normal eulogy, the family requests that I tell a LOVE story.) Phyllis and Larry began their journey at the young age of 16, their sophomore year in high school. "A Newport Country Boy GOO-GOO over a Bassett City Queen." They started off spending as much time as possible going on dates. One particular date Larry will never forget, was the time he went flying up the drive, anxious in anticipation, in his old 56 Ford, to pick up his YOUNG, Beautiful Date. He quickly "raced up the drive"... "slammed on the brakes"..,(not knowing the brakes went out)... BBAAMM!, right into his future father-in-law's fence. On July 2nd, 1965, Phyllis and Larry got married in North Platte, Nebraska. From there, they added three sons, a daughter, a son-in-law, three daughters-in-law, six grandchildren, and one great grandson. Phyllis LOVED her family more than anything in the entire world and was so proud of them. Phyllis adopted "everyone". Anyone who came to the house was "family". She always thought of everyone before herself, and would do anything to help others. This amazing woman was SO full of Life, Laughter, and Love. In the spring, it was always about planting flowers and setting out all of her "pretties" in the yard. She started every morning sitting outside with a cup of coffee, smiling and admiring their beautiful yard and all of her "pretties." On her time off from gardening, Mom loved to shop and play slot machines. Anyone who shopped with Phyllis was afraid to look at anything. If she thought you liked whatever it was you were looking at, "By God, she was going to buy it." Our family, truly, has been spoiled rotten! And then, there's the casino....This women loved to play the slots. She always said, "When I'm old, just strap me up to a slot machine and check on me once in a while." There are no words that come close to describing how truly wonderful Phyllis was, and how much her family and friends treasure her. She will truly be missed, never forgotten, and forever in our hearts. Phyllis leaves to mourn her passing, her husband, Larry of Bassett; four children, David (Chelsey) Lane of Long Pine, Nebraska, Jackie (Troy) Graf of Lincoln, Nebraska, Scott Lane and Janice Gonzales of Tempe, Arizona, Rick (Debbie) Lane of Waverly, Nebraska. Six grandchildren and one great-grandson; brother-in-law, Denny (Cindy) Lane of Bassett, as well as one step-brother and step-sister, and nieces and nephews. A memorial service was held on August 6, 2015 at the Bassett United Methodist Church with the committal being held at the Bassett Memorial Park Cemetery in Bassett, under the direction of Hoch Funeral Home of Bassett. Pastor Wayne Owens officiated the service. The Eulogy was given by Brandon Luetkenhaus. Honorary bearers were, Kelsey Lane, Kyle Lane, Dayton Graf, Trey Graf, Briley Graf, Reagan Lane and Easton Lane, all of Phyllis' grandchildren & great-grandson. In lieu of flowers, memorials were suggested to the family for a future designation.

Phyllis A. Lane was born on November 3, 1945 in Spooner, Wisconsin, and passed away in the Rock County Hospital at Bassett, Nebraska on August 2, 2015. (Instead of a normal eulogy, the family requests that I tell a LOVE story.) Phyllis and Larry... View Obituary & Service Information

The family of Mrs. Phyllis A. Lane created this Life Tributes page to make it easy to share your memories.