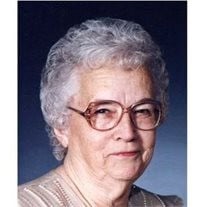 Phyllis Irene (Emry) Campbell was born to Jesse Mahlon & Blodwin Florence (Evans) Emry, on June 23, 1921 at the family home in Todd County, South Dakota. She was the baby sister of Freda, Kenneth & Russell. Her childhood years were spent primarily in rural Keya Paha County, mostly around the Norden and Cub Creek areas. She attended different rural schools in the area but talked most fondly of her time in the Norden school, where she completed the 9th grade. Norden was only a K-8 school, but due to distance from the nearest high school and her love of learning, they made an exception for her and came up with a 9th grade curriculum. She was very proud of the fact that she was the last and perhaps only student to go beyond the 8th grade there. Phyllis was an avid 4-H'er, and was quite the little cook and seamstress even as a young girl. The Emry family was always involved in their community church, and she recalled fondly her involvement in the Union Church, near Cub Creek, first as a child, and later as a Sunday School teacher. Just a few days prior to her passing, she told us how she first met her best friend, and future sister-in-law, Ortha Reynolds, at a 4-H function down along the creek on a hot summer day sometime in the early 30's. As a young woman, Phyllis worked off and on for some of the neighbors either cooking for crews, cleaning, or her favorite, staying on to help mothers with their newborn babies. That may explain why, as we were going through pictures, most of the ones we have of her, she is holding either a grandchild or great-grandchild and is always looking at the baby rather than the camera. When Dad (Perry) was asked how he and Mom had met, he would tell you that one day he gave her older brother, Russell, a ride home from school. When they arrived at Russell's house, this skinny girl came out to greet them. Perry & Phyllis dated until he enlisted in the Army in August of 1941. He was discharged to Ft. Riley Kansas on August 28th, 1945. On September 9, 1945, the couple was married at her parent's home near Cub Creek. The newlyweds moved to south-central North Dakota to farm with his father and brothers. It was here that their eldest three children, Myrna Irene, Melvin Allen, and Nina Kay, were born. In 1950, they brought their young family back to Nebraska, first to Meadville then to Ainsworth, where the youngest two children, Anita Marie and Lori Joy, were born. Phyllis was also a mother to her sister's children after Freda's death. Although the older children were mostly grown, Cleo lived with Phyllis's family, and then with Kenneth's family, until her high school graduation. Perry and Phyllis owned a laundromat, dry cleaning business in Ainsworth for a number of years. While Perry tended roads, cattle and sheep, Phyllis tended to the business. After the business closed, she cared for people as a nurses' aide at the Bassett and Ainsworth Nursing Homes and the Ainsworth Hospital. Her life and her love were her kids, which included all of the generations. Phyllis' joy was always her garden and her flowers. She was happiest outside working in her garden and with her roses. Her favorite pastime was playing pinochle with her family, which she did avidly, teaching all the younger family members and in-laws, until her last days. Phyllis left this earthly life on Thursday, November 1, 2012. She was preceded in death by her husband, Perry Allen Campbell; mother, Blodwin Florence Emry; father, Jesse M. Emry; sister, Freda Hood; brothers, Kenneth and Russell, and infant brother Mahlon; father-in-law, Fred Campbell; mother-in-law, Mary Sprague; step-father-in-law, George Sprague; brother-in-law and sister-in-law, Alvin and Elsie Campbell, brother-in-law Bill Campbell and infant grandson, Cameron Ganser. She leaves to mourn her passing: daughter, Myrna Jakob and her husband, Jerry Koszut of Ainsworth; son, Melvin Campbell and his wife, Sherry of Ainsworth; daughters, Nina Johnson and her husband, Blaine of York, Nebraska, Anita Hempel and her husband, Dick of Long Pine, Nebraska and Lori Ganser and her husband, Tim of Meadville, Nebraska; thirteen grandchildren, Allen Jakob and his wife, Susan of Aurora, Colorado, Amy Jo Sassatelli and her husband, Tom of Broken Arrow, Oklahoma, Julie Taylor and her husband, Todd of Long Pine, Sven Johnson and his wife, DJ of Colorado Springs, Colorado, Jessica Anderson of Ainsworth, Luke Ganser and his wife, Amanda of Ainsworth, Jared Hempel of Ainsworth, Ethan Campbell and his wife, Alice of Brooklyn, New York, Bo Johnson and his wife, Amber of Portland, Oregon, Angela Campbell of Des Moines, Iowa, Megan Chard and her husband, Paul of Brush, Colorado, Britt Johnson of York, Nebraska, Traci Alberts and her husband Wade of Ainsworth; fifteen great-grandchildren, Cameron and Mikey Jakob, Nicholas and Molly Sassatelli, Jonah Campbell, Ea Johnson, Casandra and Tara Taylor, Seth and Alex Anderson, Josie and Gus Ganser, Emry and Tatim Chard, and Tegan Alberts; sisters-in-law, Ortha Emry of Ainsworth, Irma Campbell of Springfield, Oregon and Alice Emry of O'Neill, Nebraska; and many cousins, nieces, nephews, and friends. Funeral services were held on Monday, November 5, 2012 at the Hoch Funeral Home in Ainsworth. Officiating over the service were Elder Marvin Morsbach and Elder Tim Schrunk. Music was provided by Sherry Campbell, Wade Alberts, Casandra and Tara Taylor. Special remarks were given by Ethan Campbell. Casketbearers were Amy Jo (Jakob) Sassatelli, Angela Campbell, Britt Johnson, Julie (Hempel) Taylor, Jessica (Hempel) Anderson, Megan (Ganser) Chard, and Traci (Ganser) Alberts. Honorary bearers were, Susan Jakob, Alice Yu Campbell, Dorothy Johnson, Amber Johnson and Amanda Ganser. Burial was held at the Ainsworth Cemetery. Memorials were suggested to the Brown County Hospital or to the Donor's Choice.

The family of Phyllis (Emry) Campbell created this Life Tributes page to make it easy to share your memories.