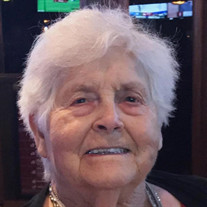 Philomenia Olive Pape, 94, beloved wife, mother, grandmother, and great-grandmother, peacefully passed into the arms of Jesus on Monday, July 12, 2021, at her home in Longwood, Florida. Philomenia was born in Newport, Nebraska on July 1, 1927, as one of twelve children to the union of Goldie Dorsey and John Gesiriech. She was in the middle of the pack and enjoyed growing up in the country with her siblings. She attended a one-room country schoolhouse within a mile of the home place until moving to Bassett to attend high school. She loved school and graduated at 16 and soon after began her career in teaching. Through WWII she taught in various country schools in North Central Nebraska, many being similar to the school she attended as a young student. With the end of the WII, she attended Wayne State College where she met her first husband Robert Pape a Navy veteran. They fell in love and were married on August 22, 1948, in Bassett. She continued to teach after their marriage but soon became a full-time homemaker with five young children. The couple lived in Wayne, Nebraska initially, then moved to Sioux City, Iowa, Mitchell, South Dakota, Brookings, South Dakota, Pekin, Illinois, a farm by Yates City, Illinois and ultimately Grand Island, Nebraska as Robert’s career blossomed with Nutrena Feeds. She made a loving home for the family at each stop along the way. The Nebraska Sandhills were never far away as she would bring her family to Newport to enjoy the country life. Many of the kids would spend summers as part of the hay crew with their uncles and multitude of cousins. From the early 1970’s she spent weekends working with Robert at their farm north of Wolbach Nebraska raising livestock and watching her kids enjoy the farm life. Later she helped Robert with their trucking business as a dispatcher. In the late 1980’s as her younger kids left the nest she continued to work fulltime in the trucking industry and ultimately worked for S&C Motors/Paris Trucking as Lead Dispatcher. In the early 1990’s, the couple retired to Newport where she helped Robert operate a small dairy at the Gesiriech Family Ranch. She was back home in the Sandhills and enjoyed spending time with her family and friends. She loved having the grandchildren visit her there exploring the Elkhorn, camping, working livestock, and climbing haystacks. For over 10 years she cooked daily meals for the hired men at Gesiriech Family Ranch and took care of her older siblings. Many a time, she was driving LaVern to dialysis or roaming the hills with the van showing Gerald the calves. At the turn of the century, she and Robert moved into Bassett from the dairy. Her daily trips out to the Gesiriech Family Ranch continued for a few more years. In the early 2000’s she began painting again of her life in the Sandhills. Her paintings include her time as a teacher in those one-room schools, landscapes, ranchers working their cattle and putting up hay, and her family at work and at play. She never expected any reward for her art just satisfaction from its creation and it’s telling of her view of life. She began spending a few of the colder months in Central Florida and ultimately moved permanently to her home in Longwood. Thoughts of family, past friends and of the Nebraska Sandhills were never far away. She continued to paint from memories and photos while enjoying time with the grandkids and eventually great grandkids. In 2015, she reconnected with her high school Beau, Ross Morgan and the couple married September 24 of that year. The couple lived in her Longwood home enjoying their numerous long trips back to the Sandhills to see family and friends. Her oldest son, Robert (Bobby) Pape previously passed in 2011 and was waiting for her in heaven. She is survived by her second husband, Ross Morgan. In addition, she is survived by her children with her first husband of almost 60 years, Robert Pape who previously passed in 2006: Cindi Pape of Lincoln, Nebraska, Kathryn Pape of Grand Island, Nebraska, David Pape with his wife Colleen Cipoletta of Orlando, Florida and Susan Hadfield of Los Angeles, California. As a grandmother and great-grandmother, she is survived by Isaac Pape of Chicago, Illinois, Olivia Hadfield of Los Angeles, California, Jared Pape of Palm Beach, Florida and Alyssa Pape of Orlando, Florida. She was blessed with great-grandchildren: Parker, Sophia, Emma and Ryan in Chicago, Illinois. Memorial Services were held on Saturday 24, 2021 at the United Methodist Church in Bassett with Pastor Martin Leeper officiating. Music was provided by Kevin and Heidi Cheng, “How Great Thou Art” and “Amazing Grace.” Inurnment followed in the Stuart Cemetery in Stuart, Nebraska where Philomenia was laid to rest next to her loving husband Robert. Memorials were suggested to the Rock County Senior Center (204 Clark Street, Bassett, NE 68714) in Philomenia’s name or to the American Cancer Society (Give online, on the phone, or through mail; donation information at https:donate3.cancer.org), with dedication to Robert (Bobby) Pape. Hoch Funeral Home of Bassett was entrusted with the service arrangements. Online Condolences may be left for the family at www.hochfuneralhome.com

The family of Philomenia O. (Gesiriech) Pape created this Life Tributes page to make it easy to share your memories.