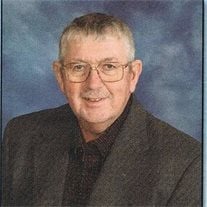 Peter A. Theisen, 74, died Friday, September 9, 2016, at Rock County Hospital in Bassett, Nebraska, after battling cancer. He was born November 12, 1941 in Osmond, Nebraska, son of Joseph and Ella (Petersen) Theisen. Pete graduated from Rock County High School with the class of 1959 and continued his studies at the University of Nebraska-Lincoln. He married Catherine on October 25, 1969. Pete was an avid outdoorsman and enjoyed hunting, fishing, and golfing. He owned and operated a farm and ranch north of Long Pine for many decades. Upon retirement, he continued working outdoors with a lawn care business. His lifelong passion for firearms was well-known. He bought, sold, and traded guns at the many shows he attended throughout his life. Pete's extensive knowledge of the history of guns, as well as the mechanics, was valuable to many of his colleagues, friends, and family. He is preceded in death by his parents, Joseph and Ella; his sisters, Shirley Carter and JoEllen Theisen; and his wife, Catherine. He is survived by his children, Nancy Senn of Bartlett, Nebraska; Judy Hickey of Sioux Falls, South Dakota; Tom Theisen and wife, Karla, of Atkinson, Nebraska; and Sharon Hodges of Granite Falls, North Carolina; nine grandchildren, and eight great-grandchildren. Memorial services were held on September 15, 2016 at the Holy Cross Catholic Church in Bassett, Nebraska with Father Phil Flott serving as Celebrant. Music was provided by Trudy Nolles. Music selections of "Here I Am, Lord" and "How Great Thou Art" were also provided. Honorary bearers were all of Pete's friends. Inurnment followed at the Bassett Memorial Park Cemetery in Bassett, under the direction of Hoch Funeral Home of Bassett. In lieu of flowers, memorials were suggested to the Holy Cross Catholic Church. I'm Free Don't grieve for me, for now I am free. I'm following the path God laid for me. I took his hand when I heard him call, I turned my back and left it all. I could not stay another day, To laugh, to love, to work or play. Tasks left undone must stay that way. I found peace at the close of day. If my parting has left a void, Then fill it with remembering joy. A friendship shared, a laugh, a kiss, Oh yes, these things too, I will miss. Be not burdened with time of sorrow, I wish you the sunshine of tomorrow. My life's been full, I savored much, Good friends, good times, a loved one's touch. Perhaps my time seems all too brief, Don't length it now with undue grief. Lift up your heart and share with me, God wanted me now, He set me free. Pete's Thank You Thank God for small towns, neighbors, and good friends. Many thanks to all those who have helped me during the recent months with their time and personal sacrifice and kind words. Special thanks to Denny, Larry, Tom, Gary, Ron, Bill, and my son for hauling me back and forth to Norfolk. "May the Good Lord take a likin' to ya." – Roy Rogers

The family of Mr. Peter A. "Pete" Theisen created this Life Tributes page to make it easy to share your memories.