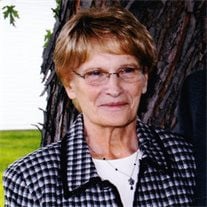 Peggy Ann (Wiley) Larson was born February 7, 1934 in Burton, Nebraska to Lucille (Lewis) and Louis Wiley. She passed away at the Rock County Long Term Care on June 21, 2017 at the age of 83. The Wewela, South Dakota and Burton, areas are where Peggy spent her childhood. She attended rural schools and graduated in the class of 1951 from Keya Paha County high school in Springview, Nebraska. A devastating event in Peggy's childhood was the early deaths of her parents, her mother when she was age eleven and her father when she was nineteen. Peggy met the love of her life while at a church event in Bassett. She was united in marriage to Stanley Larson on September 20, 1953. Stanley and Peggy enjoyed 63 years of mutual adoration and happiness together. To their marital union six children were born. Peggy was all about her family. Her pride and joy were her kids, grandkids and great- grandchildren. She particularly enjoyed the antics of the smallest grandkids. School activities were never missed and Peggy enjoyed the road trips to see her extended family. Peggy had a quiet unswerving faith in God. She taught Sunday school and vacation Bible school for many years. Music was also an important part of her faith and she loved to listen and sing along to the hymns. Piano lessons were an important life skill she thought her children should have and she spent numerous hours driving the kids to their music lessons. Daughter Deb, and son in-law, John provided many a private piano recital for Peggy much to her delight. The first job that Peggy held was as a nursing aide for Dr. Harold Panzer in Bassett. After getting married she took time to raise her family and became Stanley's "chief executive" in the hayfield. As the kids became older and more independent she went back to her nurse calling. Peggy first worked at the Bethesda Care Center nursing home in Bassett as a certified med aide and later worked at the Stuart nursing home in the same capacity. Going to nursing school was a lifelong dream of Peggy that was put on hold for many years. In her 50's she started going to school to become an LPN (Licensed Practical Nurse) and graduated with honors from Mid Plains Community College in North Platte, Nebraska in 1991. As an LPN, Peggy then worked numerous years at the Rock County Long Term Care, retiring at the age of 75. Peggy was the epitome of the perfect employee. She had high regard for her co-workers and in turn was highly liked and admired. A "gentle spirit" and "quiet calm" describe Peggy as she provided loving, compassionate care to the elderly clientele. She "made a difference" and helped make difficult life transitions easier for many people. Peggy is well known in the family for her fabulous home cooked meals. Many Thanksgiving and Christmas meals were hosted and traditional family food favorites were created. Those food traditions have carried forward into the next generation of kids and grandkids. A favorite family memory revolves around sheep shearing and all the wonderful food she would cook. Sewing was a skill that Peggy self-taught herself. She used this skill to make beautiful clothes for her daughters. Later in life she started making quilts. A family favorite is a quilt made with fabric scraps from all the clothes she made for her kids. Each grandchild has been gifted with a quilt as they graduate high school. Nebraska football had yet another avid fan in Peggy. She would add another element of excitement to any football game with her enthusiasm. Attending football games in Lincoln and several away games go down as definite highlights in her life. Peggy lived a long, satisfied active life and she will be sorely missed by her entire family. She was the sunshine of our lives. She is preceded in death by her parents and two younger sisters, Glen Ellen, and Donna. Peggy is survived by her husband, Stanley of Bassett, Nebraska, her six children, Steven (Tonya) Larson, of Bassett; Pam (Frank) Seberger, of Newport, Nebraska, Brian (Becky) Larson, of Ault, Colorado; Laurie (John) Schlaman, of Batavia, Illinois; Deb (Mike) Ruhrdanz, of Lincoln, Nebraska and Dawn (Dana) Johnston, of Highlands Ranch, Colorado; fourteen grandchildren, and twelve great-grandchildren. Funeral Services were held on June 24, 2017 at the Bassett United Methodist Church. Pastor Dennis Quigley officiated at the service. Music was provided by JoAnn Swanson. Pallbearers were Jason Larson, Tim Larson, Lee Seberger, Todd Hudson, Cortney Schlaman, Andrew Ruhrdanz, Cody Johnston, and Caleb Johnston. Honorary bearers were, all of Peg's granddaughters, and great-grandchildren. Congregational hymns of "On Eagle's Wings," "Hymn of Promise," and "Because He Lives" were sang. Burial followed at the Bassett Memorial Park Cemetery. Hoch Funeral Home of Bassett was in charge of the arrangements. In lieu of flowers/memorials were suggested to the Rock County Hospital Long Term Care.

Peggy Ann (Wiley) Larson was born February 7, 1934 in Burton, Nebraska to Lucille (Lewis) and Louis Wiley. She passed away at the Rock County Long Term Care on June 21, 2017 at the age of 83. The Wewela, South Dakota and Burton, areas are... View Obituary & Service Information

The family of Mrs. Peggy A. (Wiley) Larson created this Life Tributes page to make it easy to share your memories.