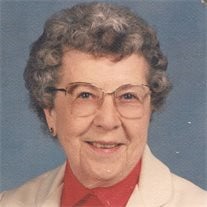 Pauline Phyllis (Welke) Dau was born November 25, 1918 to Elsa and Gustave Welke at the family homestead northwest of Wood Lake Nebraska. Pauline passed away September 21, 2014 at the Ainsworth Care Center. Pauline attended elementary school in a country schoolhouse around Wood Lake, and attended Woodlake High School where she graduated in 1936 as Valedictorian of her class. Soon after graduation, Pauline met the love of her life and married Walter "Bud" Dau on November 25, 1937. Bud and Pauline lived in an around the Wood Lake area for a number of years where Bud worked on ranches in the area. They moved to the Scribner-Hooper area where the couple worked at the Dodge County Farms. They moved back to the Wood Lake area and Pauline worked for her brother Gene Welke in a café in Ainsworth. In March of 1952, they adopted a daughter Phyllis Diane (Dau) Magill. Pauline was involved in being a stay at home mother for several years and also looked after her mother Elsa. She learned to bowl and was on a bowling league for several years. Pauline was very involved in her church, the Congregational United Church of Christ of Ainsworth, where she was a member for 64 years. Bud and Pauline served on the Diaconate Committee, Pauline was involved in the Women's Fellowship and held various offices on the Fellowship board, and Pauline was a Sunday school teacher for several years. In her middle age years she worked for Delores Stec at the Mode O´ Day clothing store. Pauline was a member of the Hi-Uppity Club for many years with some of her relatives and best friends. The club was known for their craft work, traveling to each other's homes each month, and of course visiting and having lunch. She joined the Ainsworth Does Drove #54 as a charter member in February of 1950 and was a 5 year member. Pauline was also a member of the Brown County Hospital Auxiliary. Pauline loved to sew, garden, and bake. She had a love for her friends and family. Family was one of the most important things in her life along with her dedication to her church fellowship. Preceding her in death were her husband of 41 years, Walter "Bud" Dau; parents, Elsa and Gustave Welke; 2 infant siblings; brothers, Carl Welke, Otto Welke, Gene Welke and Bill Welke; sisters, Millie Johnston, Dolly Carter, and Mary Ritter. Survivors include: daughter, Phyllis Magill, son-in-law, Dean Magill; granddaughters, Rebecca (Magill) Logemann, Melissa Campbell and husband Jody; grandson, Robert Magill and special friend Harlea Stephens; great-granddaughters, Jayden, Madyson, Camryn Campbell, and Adalyn Magill; along with several nieces, nephews and cousins. Funeral services were held on September 26, 2014 at the Congregational United Church of Christ with Pastor Neva Murphy officiating over the service. Music was provided by Mr. & Mrs. Georg Williams. Music selections were, "Amazing Grace," "In the Garden," and "Nearer My God to Thee". Special memories were shared by the family. Pallbearers were Chris Osterman, Randy Welke, Gary Welke, Woody Welke, Jerry Welke, and Bill Welke. Honorary bearers were all of Pauline's other family and friends. Burial was at the Mt. Hope Cemetery in Wood Lake, Nebraska. Memorials were directed to the Nebraska Children's Home or to the Congregational United Church of Christ in her name. . Hoch Funeral Home was in charge of the arrangements.

The family of Mrs. Pauline P. (Welke) Dau created this Life Tributes page to make it easy to share your memories.