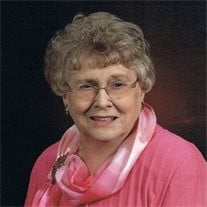 Pauline Jacquelyn "Jackie" Graff was born February 20, 1928, at the family home in Johnstown, Nebraska to Martin and Freda (Schulz) Petersen. She attended Johnstown School through the 11th grade, graduating 12th grade from Ainsworth High School in 1945. Due to the teacher shortage during WWII Jackie received a 3rd Grade Teacher Certificate for rural schools. In 1945 and 1946 she taught school in Albany, Oregon, where her sister Avalda lived, moving back to teach in Cherry County in 1946 and 1947. On March 16, 1947, Jackie married Dean Graff and the couple moved to Omaha. While in Omaha, Dean and Jackie welcomed their first child, Connie. In 1950, the three returned to Brown County and started farming. During this time they welcomed Kathy, Merrilee, and Marty. In the fall of 1960 they moved to the family farm. While the children were growing up, Jackie enjoyed sewing their clothes, often making matching outfits for all of them. She also loved to design and sew the girls' prom dresses and later bridesmaids' dresses. Jackie loved to crochet doilies, giving them as shower gifts to friends and family. She was a resourceful and creative decorator, always adding that "extra little something" to make it special. Through the years, Jackie always kept a garden and came to be known for her love of roses and day lilies. Jackie was very active in the Johnstown Methodist Church, joining in 1941. She served 13 years as a Sunday School teacher and as Sunday School and Bible School superintendent. She served as the Church treasurer, co-chair of the 1986, 100 year anniversary celebration and, along with Dean, volunteered for mission work. She became a member of the United Methodist Women in 1952, holding the positions of both treasurer and president. In 1965 Jackie began working for the United States Postal Service as a clerk in Johnstown as well as a clerk in the 1970's in the Ainsworth office. She served as Acting Postmaster in Wood Lake in both 1978 and 1980. Jackie became the Johnstown Postmaster in 1981, retiring in 1989. Throughout her life, Jackie remained very involved in her community. In 1951 she became a member of Grand Prairie Home Band. She was active in the extension clubs, both Cozy Corner and Johnstown Gals, where she was a 50+ year member. Jackie was a Leader of the Lucky Lassies 4-H club as well as a Den Leader for Cub Scouts. She was a member of the Ainsworth Does Drove #54, serving as president, among other offices, and also held many offices as a member of the Eastern Star of Wood Lake including Worthy Matron twice. Jackie served on the Johnstown East Wood Lawn Cemetery board from 1997 – 2012. Brown County Fair was always a busy time for Jackie. From 1961 – 1971 Jackie built the Brown County Fair float as well as many others over the years. In 1978, she became the superintendent of the Needlework division, serving until 2009. In 2004, Dean and Jackie retired from the farm and moved into Ainsworth where Jackie enjoyed volunteering at the Ainsworth Hospital Auxiliary Thrift Store. For 10 years, she sewed quilts for Epworth Village and the Church missions as well as the Sheriff's Posse Christmas, and the Post Prom Party. Jackie could always be counted on to make her lemon pie for the senior center bake sale. She loved to cook, but NEVER measured. Jackie loved to shop, especially if there was a good sale. She was always ready for a game of bridge or, really, any kind of cards. Jackie passed away at her home in Ainsworth on April 20, 2015. Survivers include her children; Connie and Brad Dillon, Kathy and Bill Burchell, Merrilee Spanel, and Marty and Brenda Graff. Grandchildren; Jim and Jennifer Rau, son, Jesse and daughter, Jade; Deena and Ric Fritz, son, Bryson, daughters, Rachel, Harley Svenson and Dilan Harvey; Tom and Tammy Burchell, daughter Maddy; Christy and Bub Killion, sons, Taylor and Pete, daughters, Morgan and AJ Stevens, son, Glen, Jackie's Great-Great-Grandson; Emily and Dean Johnson, daughter, Katrina Keogh; Jodi Spanel, sons, Juston Spanel and Kamren Hamlin; T.J. and Shannon Spanel, sons, Evan and Aidan; Jamie Spanel; Jake and Jeri Graff, daughters, Ava and Elsie; Lucas Graff, Micah Graff, Noah Graff; Sisters-in-law, Jeanne Graff and Glee Swanson, and a host of nieces, nephews, and cousins. Memorial services were held on Saturday, April 25, 2015 at the United Methodist Church in Ainsworth. Pastor Eldon Davis officiated the service. Music was provided by Marilyn Williams, with Jennifer Lester singing "Come Home" and "In The Garden" selections. The Congregational selection was, "God Be With You Til We Meet Again." Honorary bearers were, James Rau, Ric Fritz, Tom Burchell, Bub Killion, Dean Johnson, T.J. Spanel, Jamie Spanel, Jacob Graff, Lucas Graff, Micah Graff and Noah Graff. Ushers were, Corby O'Hare, Rick Goochey, Randy Johnson, and Wes Luther. Organizational Rites were given by the Does Drove #54. A private family inurnment was held at the East Woodlawn Cemetery near Johnstown, Nebraska. Hoch Funeral Home of Ainsworth was in charge of the arrangements.

The family of Mrs. Pauline Jacquelyn "Jackie" Graff created this Life Tributes page to make it easy to share your memories.