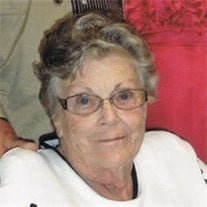 Pauline A. Kozisek, 78, of Ainsworth, passed away on Wednesday, July 17, 2013, at the Brown County Hospital after struggling with ill health for many years. She was born on November 7, 1934, to Leo and Elsie (Brochtrup) Birkel in David City, Nebraska. Pauline grew up there and graduated from David City High School. She was married to Daniel Kozisek on February 25, 1952. To this union were born three children: Colleen, Mark, and Greg. Throughout her life, Pauline was an active member in numerous community organizations and activities. She volunteered as a 4-H Club leader, a Cub Scout den leader, and a teacher's aide for special needs students. As a member of the Brown County Hospital Auxiliary, Pauline organized blood drives and worked in the auxiliary thrift shop. While serving on the Ainsworth Library Board, she was a driving force behind the construction of the existing public library. Strengthened by her strong belief in her Catholic faith, Pauline was actively involved in the St. Pius X parish and twice served as the Altar Society president. She also taught religious education classes for twenty-four years. Pauline served as president of P.E.O. and belonged to several bridge clubs. As her health declined in later years, Pauline developed an interest in quilting and donated baby quilts to various children's charities. Pauline felt her greatest accomplishment was raising her three children, but her greatest joy came from spending time with her grandchildren and great grandchildren. Pauline was preceded in death by her parents, Leo and Elsie, and two brothers, Charles and Thomas. She leaves to mourn her passing her husband, Daniel Kozisek of Ainsworth; daughter, Colleen (John) Viola of Fort Worth, Texas and grandchildren Ryan (Maria) Viola and Paul Viola; son, Mark (Joni) Kozisek of Ainsworth and grandchildren Tye, Drew, Claire and Conner; son, Greg (Sue) Kozisek of Lincoln, Nebraska and grandchildren Matthew (Jenn) Kozisek and Kellin Kozisek; great grandsons, Daniel and Mason Viola and Cameron Kozisek; brother, Richard Birkel of Omaha; many other family members; and a host of friends. Everyone who knew Pauline was enriched as she used humor, courage and dignity to deal with her health challenges. A Rosary prayer service was held at Hoch Funeral Home in Ainsworth on July 21, 2013. Funeral services were held on July 22, 2013 at the St. Pius X Catholic Church in Ainsworth, Nebraska with Father Jim Heithoff serving as Celebrant. Also in attendance were Father James Janovec, Father James Murphy, Father James Hunt, and Father Lou Nollette. Music was provided by Nicole Flynn and Jason Nelson. Song selections were, "Be Not Afraid", "On Eagle's Wings", "Ave Maria", "Irish Blessing" and "Amazing Grace". Pallbearers were, Ryan Viola, Paul Viola, Matthew Kozisek, Tye Kozisek, Drew Kozisek, Conner Kozisek, Kellin Kozisek, and Claire Kozisek. Honorary pallbearers were, all of Pauline's other family and friends. Interment was held at the Ainsworth Cemetery, under the direction of Hoch Funeral Homes of Ainsworth. In lieu of flowers, memorials were suggested to the St. Pius X Catholic Church.

Pauline A. Kozisek, 78, of Ainsworth, passed away on Wednesday, July 17, 2013, at the Brown County Hospital after struggling with ill health for many years. She was born on November 7, 1934, to Leo and Elsie (Brochtrup) Birkel in David City,... View Obituary & Service Information

The family of Pauline A. (Birkel) Kozisek created this Life Tributes page to make it easy to share your memories.

Pauline A. Kozisek, 78, of Ainsworth, passed away on Wednesday,...