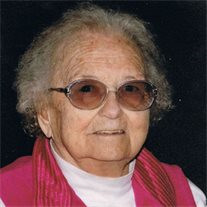 Pearle Elaine (Galusha) Ruther was born on October 16, 1921 to Orville and Maude (Plock) Galusha in Fairmont, Nebraska. At the age of nine, the family moved to Chadron, Nebraska for three years before moving to the Edd Heineman place in Keya Paha County. She attended Guide Rock School and graduated from Keya Paha County High School in 1939. After graduating from High School, she taught school at the Pleasant Valley School for one term, teaching six students. She earned $45 a month and thought she was rich. She married Ernest Ruther on October 9, 1940 in Valentine, Nebraska. They had three children; Marie, Geraldine, and Jim. Elaine and Ernie sat up house one mile west of Ernie's folk's place and lived their entire married lives there. Elaine was a member of Three Pines Extension Club for many years, as well as being active in any job on the ranch. She worked cows, milked, and hayed. She always planted a big garden and used its produce to feed many meals to anyone needing to eat. There were always extra mouths at meal time with neighbors, Jim's friends, grandkids and hay crew. Ernie and Elaine loved music and dancing. They took their oldest daughter to her first dance when she was only three weeks old. They attended many years of Norden Dances, (but not until the Lawrence Welke Show was over for the night). They traveled with her sister Charlotte and husband Mervin Shattuck. They made many trips west – to Yellowstone, California, and Old Mexico. After Ernie lost his eyesight and became crippled with arthritis, Elaine never hesitated to pull the camper trailer to take the grandkids on summer camping trips. Elaine's granddaughters, Jannette and Brenda, share stories of Grandma flipping off a driver in Chadron, and also of the grandkids losing their teeth at Lake McConaughy. Elaine could always be counted on to 'voice her opinion.' In fact, she often said, "she didn't plan what she was going to tell you, but once she started talking, it just came out on its own." Her family and friends knew that they could count on her for an honest chewing if it was deserved. After Ernie died in 1999, Elaine stayed on at the ranch until she moved to Cherry Hills Estates in Valentine in 2009. She enjoyed the activities there until her health declined and she moved to Ainsworth Care Center just two weeks before her passing. Elaine was preceded in death by her parents, Orville and Maude Galusha; brother-in-law, Mervin Shattuck; husband, Ernest; and a son-in-law, Jerry Alberts. Left behind to mourn her passing is her sister, Charlotte Shattuck of Lincoln; daughters, Marie and husband, Jim Larson of Springview, Geraldine Alberts of Scotia and son, Jim and wife, Heidi Ruther of Springview; six grandchildren, 15 great-grandchildren, and two great-great grandchildren. Funeral services were held on September 11, 2014 at the United Methodist Church in Springview, Nebraska with Pastor Rod Heilbrun officiating over the service. Special saxophone music of "In the Garden" and The Old Rugged Cross" was provided by Rick Nelson and Stanley Libolt. Pallbearers were, Carl Chase, Dick Caulfield, Rodney Schoettger, Melvin Gibson, Larry Titus, and Steve Swan. Honorary bearers were all of Elaine's other friends and neighbors. Burial was held at the Mount Hope Cemetery in Springview under the direction of Hoch Funeral Home of Ainsworth. Memorials were directed to the Mount Hope Cemetery of Springview.

Pearle Elaine (Galusha) Ruther was born on October 16, 1921 to Orville and Maude (Plock) Galusha in Fairmont, Nebraska. At the age of nine, the family moved to Chadron, Nebraska for three years before moving to the Edd Heineman place in Keya... View Obituary & Service Information

The family of Mrs. P. Elaine (Galusha) Ruther created this Life Tributes page to make it easy to share your memories.