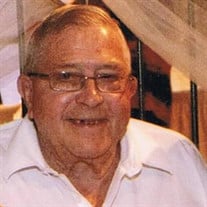 A memorial visitation will be held on Saturday July 13, 2019 at 12:00 noon, with the service to begin at 1:00 PM in the New Apostolic Church, at 940 West 1st Street, in Ainsworth. The officiant for the service will be Pr. Ricky Fuendling and Eugene Beck will present the Eulogy. Full Military Honors will be given by the Ainworth American Legion Post #79. Hoch Funeral Home assisted with the arrangements. Orville Abraham Morlang, 87 of Ainsworth, Nebraska, passed away Saturday, June 22, 2019 at Great Plains Health facility in North Platte, Nebraska. After a brief battle against multiple medical issues he went peacefully from this life to the next life, surrounded by loving family. Orville was born at home in Norden, Nebraska to Abraham and Clara (Herren) Morlang on September 1, 1931. He joined two brothers, a sister and later another brother. After completing the eighth grade he and his older brother worked various area farms before signing up for the Army during the Korean conflict. He enlisted in August of 1952, was trained as a soldier for combat and appointed the rank of Corporal on February 22, 1954 at Fort Leonard Wood, Missouri. In August of 1954, after sustaining an injury, he was honorably discharged from active duty. During his time at Fort Leonard Wood, Orville began wondering about what happens when one dies. He had been baptized into the New Apostolic Church as a child in Norden however the congregation disintegrated during the depression. There was a New Apostolic Church in Kansas City, Missouri and Orville connected with ministers there. While on leave, the young soldier happened into the grocery store in Norden, where, unbeknownst to him, someone dared Barbara Foster, (of Sparks, Nebraska,) to throw a bunch of grapes at “that good looking serviceman….” Orville and Barbara were married a short time later and moved to Kansas City where the two became active in the New Apostolic Church. The ministers and congregants welcomed them. It was there he found answers to his questions about life, death and soul salvation. It was there Orville answered the call and dedicate his soul to God. Orville read meters for the Kansas City Gas Company. He and Barbara participated in church services, activities and fellowships. Three girls were born to the young couple while in Kansas City. In 1960 the family moved back to Nebraska where their son was born and with support from Kansas City New Apostolic clergy and friends the newly ordained Priest and his wife lovingly devoted themselves to reinvigorating, growing and maintaining the Nebraska and South Dakota area congregation previously scattered during the 30’s. This was his lifelong passion. He worked as a propane truck driver in Valentine, Nebraska before moving to Ainsworth and settling into an 18-year retail career at the S&S Farm Supply Store, the last 14 years as the store’s manager. While not working the land directly, he found great satisfaction being able to assist farmers, ranchers, and the community pursuing life in the Sandhills. His next and final career move was to Farmer-Rancher Coop driving truckloads of needed materials and equipment to farms and ranches served by the cooperative. Orville felt extreme joy traveling the Nebraska countryside and visiting with everyone he met along the way. He enthusiastically shared his stories and descriptions of “Nebraska, the Good Life”. Orville loved his family, church, and living in the Sandhills. He was preceded in death by his parents, Abraham and Clara, as well as all of his siblings; Phillip, George, Rudy and Louise. He is survived by his wife of 63 years, Barbara of Ainsworth and their children; Travis of Kansas City, Kansas, Teresa of Chatsworth, California, Trudy (Kevin) Stadler, of Rolla Missouri and David (Monika) of Tulsa Oklahoma; four grandchildren and two great-grandchildren. In lieu of flowers, memorials are suggested to the Sandhills Cancer Fund. Address:428 E. 8th St. Ainsworth, Ne. 69210

A memorial visitation will be held on Saturday July 13, 2019 at 12:00 noon, with the service to begin at 1:00 PM in the New Apostolic Church, at 940 West 1st Street, in Ainsworth. The officiant for the service will be Pr. Ricky Fuendling and... View Obituary & Service Information

The family of Mr. Orville A Morlang created this Life Tributes page to make it easy to share your memories.