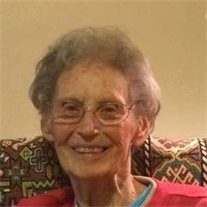 Ortha Loretta Emry passed away at the Brown County Hospital on August 1, 2016, at the age of 93. She was born to John L. Reynolds and Susie Amy (Shattuck) Reynolds on April 13, 1923 in her parent's house about 13 miles northwest of Springview, in Keya Paha County, Nebraska. Ortha was the youngest of three daughters. She and her sisters Alice and Inez grew up on property originally homesteaded by John's parents. She attended Guide Rock School and then Springview High School. In 1938 she married Kenneth E. Emry. Together they had four children: Leona Joan (born 1939), Robert John (born 1940), Ruth Marie (born 1942), and Raleigh Evan (born 1944). They lived at various places in Keya Paha and Brown Counties until 1945, when they purchased property near the Niobrara River in northeastern Brown County. The family lived and grew up there until most of the four children were in high school, when they moved to Ainsworth. In 1961 the marriage failed, and Ortha moved to Oregon, where her two older sisters had lived for many years. In 1962, she married Russell R. Emry. Their son Thomas Russell was born in September 1963. Russell was working as a heavy equipment operator at that time and for a few years they lived first in western and then in eastern Oregon where Russell worked on the Hell's Canyon Dam. In 1968 they settled in Vale, Oregon (where Ortha's sister Inez lived) and lived there for many years. Russell passed away in 1996. Ortha continued to live in Vale, Oregon until 2005, when she returned to Ainsworth, Nebraska, where she resided at 321 North Wilson Street until 2015. She then resided at Cottonwood Villa Assisted Living Center until shortly before her death. She is survived by all five of her children: Leona Emry of Kearney, Nebraska, Robert (Jennifer) of Arlington, Virginia, and Ainsworth, Ruth (Bill) Micheel of Ainsworth, Raleigh (Terry) of Manchaca, Texas and Thomas (Lori) of Boise, Idaho; 14 grandchildren, 17 great-grandchildren, and five great-great grandchildren.

Ortha Loretta Emry passed away at the Brown County Hospital on August 1, 2016, at the age of 93. She was born to John L. Reynolds and Susie Amy (Shattuck) Reynolds on April 13, 1923 in her parent's house about 13 miles northwest of Springview,... View Obituary & Service Information

The family of Mrs. Ortha L. (Reynolds) Emry created this Life Tributes page to make it easy to share your memories.

Ortha Loretta Emry passed away at the Brown County Hospital on...