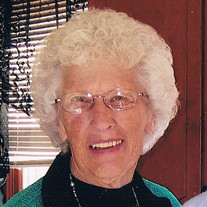 Oretta Hope (Thiede) Farlin was born to Howard E. and Lucy Ann (Wilkins) Thiede, September 18, 1931, near Burton, Nebraska, and passed away on June 27, 2019 at Kearney, Nebraska. She accepted the Lord as her Savior at an early age and was a life long member of the Burton Assembly of God Church. She attended school in Burton through the tenth grade and graduated from Keya Paha County High School in 1949. In May, she had attended her 70th class reunion. Oretta married Ivan Farlin on May 1, 1951. While Ivan served in Korea, she taught in rural schools in Keya Paha County. She was a homemaker and worked along side her husband on their ranch. Oretta was talented in many ways, such as sewing, decorating wedding cakes, reupholstering many couches, chairs, and car seats, and helped with remodeling their home. She was a great cook and her dinner rolls, cinnamon rolls, and pies will greatly missed by her great-grandchildren. Oretta was preceded in death by her parents, Howard and Lucy Thiede. She is survived by her husband, Ivan of 68 years; daughter, Deb (Dan) Sohl of Norfolk; grandchildren, Jeremy Holan of Omaha, Nebraska, and Jenna (Noe) Mireles of Norfolk; great-grandchildren, Lucy and Townsend Holan, Jayce Spiker, Presley and Noe Mireles. Brother and sister-in-law, Orrin (Joan) Thiede; brothers-in-law, Leslie (Bev) Farlin, and Stan (Lois) Farlin, Don (Pat) Farlin; sisters-in-law, Vivian Wood, Veda (Mike) Chase, Anita (Bret) Benedict, and many nieces and nephews. Memorials are suggested to the family in her name for a future designation. Funeral services were held on July 2, 2019 at the Burton Assembly of God Church in Burton, Nebraska, with Pastor Dick Wallace and Pastor John Pauls officiating the service. Special music selections of “Sheltered In The Arms of God” were sung by Karen Lind, Linda Andrews and Cheri Pauls sang, “Because He Lives” and the CD selection of “Well Done” by The Afters were provided. Special memories were shared through readings from family members. A guitar solo of “I’ll Fly Away “was played by grandson, Jeremy Holan at the Commital Service. Pallbearers were Bruce Palmer, Clint Focken, D.D. Linse, Tim Cook, Carlyle Cook, and Kevin Schoettger. Honorary bearers were all of Oretta’s other friends and her family. Burial followed at the Mt. Hope Cemetery. Hoch Funeral Home was in charge of the arrangements.

Oretta Hope (Thiede) Farlin was born to Howard E. and Lucy Ann (Wilkins) Thiede, September 18, 1931, near Burton, Nebraska, and passed away on June 27, 2019 at Kearney, Nebraska. She accepted the Lord as her Savior at an early age and was... View Obituary & Service Information

The family of Mrs. Oretta H. Farlin created this Life Tributes page to make it easy to share your memories.