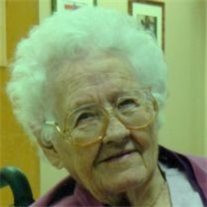 Opal F. Boyd, age 98, passed away Tuesday, May 5, 2015 at Central Wyoming Hospice in Casper, Wyoming following stroke complications. Opal Frances Welke was born April 2, 1917 in the Sandhills of Cherry County near Wood Lake, Nebraska. She was the first of seven children born to Fred and Anna (Mundt) Welke. Her childhood years were spent in the Black Hills near Vail, South Dakota. The family moved back to her beloved Sand Hills, northwest of Wood Lake in 1927. Opal strived to be first in all things. Interestingly, her room number at Hospice was #1. Opal attended country school in South Dakota and in District #36 in Cherry County until the family moved into Wood Lake in 1932. At the age of 13, Opal began working for the Kreycik, Reyman and Cozad families during the summers. She met Allan Boyd at a dance in 1932 and they courted until August 11, 1935 when they were married in Ainsworth, Nebraska. They moved to the Boyd ranch located three and one half miles southwest of Johnstown and remained there for the next 63 years. To this union one daughter, Shirley was born. Plum Creek ran through the ranch and Opal found great pleasure in watching and listening to the birds and observing the wildlife. She sponsored the Hobby Harvest Craft Fair held each fall in Ainsworth from 1976 to 1991. She enjoyed cooking, gardening, canning, sewing, crocheting and crafts. Her homegrown tomatoes were relished by many. Opal collected recipes and cookbooks. Due to blindness caused by macular degeneration, she was appreciative to those that continued to read recipes to her. An apple named 'Opal' is now available and her last conversation was about making apple pie. Opal was devoted to the Brown County Fair and attended the first fair held in 1935 and never missed one until 2012 after 76 years of perfect attendance. She loved flowers and proudly supervised the outstanding flower exhibits at the Brown County Fair for over 30 years. She received many prizes for her vegetables, jellies, pickles, peaches, sewing and flowers. In her honor, some of those fair ribbons will be worn by members of her family on the day of the services. For the enjoyment of the public, craft projects of the current year were displayed in the Hi-Uppity Club booth. She also designed floats for the parade and contributed many hours of her life to the betterment of the fair and the community. She was passionate about life and her family. Due to declining health, Allan and Opal sold their ranch and moved to Ainsworth in 1998. The Boyd ranch was purchased by the State of Nebraska in 1999 and has become Plum Creek Valley Wildlife Management Area and continues to be enjoyed by the public. Allan passed away September 29, 2000. In 2008 Opal moved to Cottonwood Villa and in 2012 she reluctantly moved to Poplar Living Center in Casper, Wyoming but her heart remained in the Nebraska Sandhills. She was preceded in death by her parents, a half-brother, Winfred; and her brothers, Sam, Ed, Vick, Art and Lewis Welke. Her memory will live on through her sister, Annabelle Anderson of Ness City, Kansas; daughter, Shirley; three grandsons, Steve and wife Paula and children, Eric and Jennell; Stan; Dave and wife Rhonda and his sons, Daniel and Jeremy. (Jeremy and wife, Lindy are the parents of Opal's great-great granddaughter, Carly Jo Mundorf.) Also surviving are grandchildren Acacia Tille, son Hunter and Mackenzie Tille all of Casper, Wyoming. Many nieces, nephews and other close relatives also survive. Funeral services were held on May 12, 2015 at Hoch Funeral Home in Ainsworth with Pastor Eldon Davis officiated over the service. Prelude and postlude music along with the instrumental, "When the Saints Go Marching In" was provided by Sherry Campbell, and Lisa Wiebesiek sang the music selection of "Somewhere Over the Rainbow." A special CD selection of "When I Get Where I'm Going," recorded Jennell Mundorf, was also provided. Pallbearers were, Steve Mundorf, Stan Mundorf, Dave Mundorf, Daniel Mundorf, Jim Welke, and Bernie Wyatt. Burial was held at the East Woodlawn Cemetery near Johnstown, Nebraska. In lieu of flowers, memorials were suggested to the East Woodlawn Cemetery or to the donor's choice.

The family of Mrs. Opal F. (Welke) Boyd created this Life Tributes page to make it easy to share your memories.