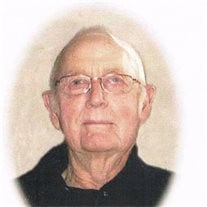 Norman Dean Nelson was born on the ranch east of Springview on August 24th 1928 to John "Verner" and Margaret (Tanner) Nelson. He went to be with the Lord on Dec. 23, 2014. Norman attended grade school at the Green Valley School, District #4, six and one half miles east of Springview. He attended Keya Paha County High school and graduated in 1946. Norman went right to work on the ranch with his father and brother E.R (Everett). Norman was drafted in to the Army in November of 1951 and served in Japan until April of 1953. While in the Army Norman was a welder, a skill that served him and the neighborhood his entire life. Norman crafted many hay sleds in his shop from old truck axels and hoof trimming chutes for his registered Herefords. Norman started his Registered Hereford herd after an honorable discharge from the Army. Norman spent many years building his registered herd. Norman was united in marriage to Marilyn Beth Jensen on September 27, 1953 in Lexington, NE. Norman and Marilyn built their family on the ranch where Norman grew up. Norman was a very patient teacher. When the kids were in 4-H breaking the calves to lead, he always told the kids never let go of the rope." The kids remember being drug around the yard but never let go of the rope. Norman was very active in 4-H, Farm Bureau, Nebraska Hereford Association, and the Methodist Church. Norman was a handy carpenter and after retirement he enjoyed woodworking, fishing, and gardening. He always looked forward to spending time with his grandkids and great grandkids. The grandkids always commented on his epic woodpiles and always wondered why he was cutting more. He was always willing to help his neighbors, whether it was branding or moving cattle, he was always ready with his horse. Most people called him ornery, but we knew he was just joking and fun loving. He also enjoyed playing cards with friends and singing in the Men's and Church Choir. For years, he and Marilyn sang for many funerals and hosted annual caroling parties. Norman will always be remembered for his smile, gentle personality, and his ability to make other people laugh. Norman was preceded in death by his parents; brother and sister-in-law, Everett and Shirley Nelson; nephew, Ceile Nelson; and cousin, Margaret Haun. He is survived by his wife Marilyn of 61 years; daughter, Peggy Scheffler and finance´ Marlan Smith of Johnstown, Nebraska; sons, Ricky Nelson and Scotty (Melody) Nelson of Springview, and Tracy (Ayse) Nelson of Atkinson, Nebraska; 6 grandchildren and 5 great-grandchildren; and nephews. Funeral services were held at the United Methodist Church in Springview, Nebraska with Pastor Rod Heilbrun officiating the service. Music was provided by Stanley Libolt playing a saxophone medley and accompanied by Kristy Libolt on the piano. Congregational selections were, "How Great Thou Art" and "Amazing Grace." A special musical selection of "Blessed Assurance" was provided by the Methodist Men's Choir. Pallbearers were, Jim Ferguson, Rocky Sheehan, Jack Martin, Bill Barnes, Will Davis, and Dave Hespe. Honorary bearers were, all of Norman's other friends and family. Burial was held at the Mt. Hope Cemetery in Springview with Military Honors given by the Springview American Legion Post #98. Hoch Funeral Home of Ainsworth was in charge of the arrangements.

Norman Dean Nelson was born on the ranch east of Springview on August 24th 1928 to John "Verner" and Margaret (Tanner) Nelson. He went to be with the Lord on Dec. 23, 2014. Norman attended grade school at the Green Valley School, District #4,... View Obituary & Service Information

The family of Mr Norman Dean Nelson created this Life Tributes page to make it easy to share your memories.

Norman Dean Nelson was born on the ranch east of Springview on...