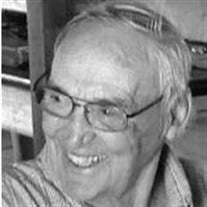 Norman Earl "Bud" Larsen of Springview, Nebraska, died at the age of 87 on June 24, 2019 in North Platte, Nebraska. Bud was born on December 3, 1931 in Black Pipe, Bennett County, South Dakota to Arthur George Larsen and Edna Mae (Heeb) Larsen. He graduated from Keya Paha County High School in Springview, NE in 1949 where he excelled in sports. In 1953, Bud graduated from Chadron State College in Chadron, NE where he held the all-time scoring record in basketball for 26 years. Bud was inducted into the CSC Athletic Hall of Fame in 1983 for his outstanding basketball career. Bud was united in marriage to Marilyn M. Willer on August 16, 1953 at the First United Methodist Church, Chadron, NE. During their 62 years of marriage, they lived in many towns in Nebraska including Valentine, Alliance, Omaha, Chadron, Stuart, Crawford, Cozad and Bud's hometown of Springview. He was a teacher, principal and coach but his passion was his thoroughbred horses. He was named Nebraska's Thoroughbred Breeder of the Year in 1984. He was preceded in death by his parents, Art and Edna Larsen; wife, Marilyn M. (Willer) Larsen, brother, Paul Larsen and sister, Donna (Larsen) Brown. Survivors include his children: Roger Larsen, Sturgis, SD, Rhonda Todd (Tracy), Maxwell, NE, Kellie Larsen (Sally Runge) North Platte, NE and Sherry Wigington (Kyle), Colorado Springs, CO. Seven grandchildren and 13 great-grandchildren, and sister: Patricia Sampy (Dale), Ansley, NE. The family will hold a private gathering at his home, followed by inurnment at Mount Hope Cemetery in Springview at a later date. Memorials may be made to the Springview United Methodist Church in his memory. The day my final race is run, And, win or lose, the sinking sun Tells me it's time to quit the track And gracefully hang up my tack, I'll thank the Lord the life I've led Was always near a Thoroughbred. Hoch Funeral Home of Ainsworth assisted with the arrangements.

The family of Mr. Norman E. "Bud" Larsen created this Life Tributes page to make it easy to share your memories.

Norman Earl &quot;Bud&quot; Larsen of Springview, Nebraska, died at the...