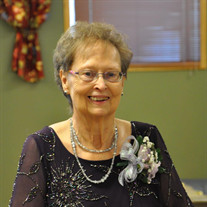 Norma Jean Waits a long time resident of Ainsworth, Nebraska earned her angel wings on June 16, 2020 at CHI Health Good Samaritan in Kearney, Nebraska at the age of 76 years old. She lost her 8 ½ year battle with many health issues. She was a courageous woman, a fighter, she was never one to give up on anything or anyone. She was born on August 6, 1943 in Valentine, Nebraska to Henry & Francis (Ward) Lurz born the second oldest of five children and the oldest daughter. She grew up on the family farm north of Valentine taking on numerous chores as well as the cooking and other responsibilities. She graduated from Valentine High School in 1961 and attended business school in Rapid City and then returned to Valentine to work for Ballard Insurance and Real Estate. She worked there until meeting the love of her life Les and moved to Ainsworth after their wedding at the Methodist Church in Valentine on July 3, 1966. To this union two daughters were born Vicki Jo and Mary Jean. They would be celebrating their 54th wedding anniversary. She always put families needs first before her own. She loved her devoted husband, daughters and their spouses and grandchildren always making sure they had everything they needed. She lost her mother in 1967 and that time her family fell apart and she was the glue that held this family together to make sure family was first. After moving to Ainsworth, Norma went to work for Gene Waits selling insurance until his passing then went to work for Roy Raitt then Chuck Raitt until his time of death. She sold the agency and worked for Kulek Agency, First National Agency and North Central Insurance at which time she retired because of failing health. She attained her realtors license and sold real estate for many years. She spent a total of 50 years helping her customers and community. She was known as a hard worker, very honest and a brilliant woman. She refunded, clipped coupons, kept books and volunteered many hours. She never complained and there was always a hot home cooked meal with the family around the table. She always looked out for those less fortunate to make sure children had a meal, had clothes on their backs and general concern for her fellow man. She is survived by her husband Les Waits of Ainsworth, daughters Vicki Krueger and husband John of Central City, Mary Beel and husband Henry of Johnstown. Grandchildren Taylor Wall and wife Whitney of Clarks, Maci Wall of Central City and Henry K, Hannah and Holden Beel of Johnstown. She is also survived by brothers Jim Lurz and wife Iodine of Ainsworth, Hank Lurz and wife Mimi of Greensboro, Maryland and sisters-in-law Melba Bejot of Ainsworth, Pam Lurz of Norfolk, special nephews Brad Waits of Wood Lake and Bart Waits of Ainsworth and other nieces and nephews. She was preceded in death by her parents, sister Clara, brother Richard, brothers-in-law Gene Waits, Francis Bejot and sister-in-law Elaine Waits. Funeral Services were held Saturday, June 20, 2020 at the United Methodist Church in Ainsworth with Pastor David Randall officiating. The music selections of “One Day At A Time” by Christy Lane, “Old Rugged Cross” by “Alan Jackson, and “Jealous Of The Angels” by Donna Taggart were played. Casket Bearers were: Brad Waits, Derek Waits, Taylor Wall, Bart Waits, Henry K. Beel and Holden Beek. Honorary Bearers were: Maci Wall, Hannah Beel and all of Norma’s other family and friends. Burial was at Ainsworth Cemetery under the direction of the Hoch Funeral Home of Ainsworth. In lieu of flowers, memorials have been suggested to the Sandhills Care Center Resident Enrichment Program in Norma’s name.

Norma Jean Waits a long time resident of Ainsworth, Nebraska earned her angel wings on June 16, 2020 at CHI Health Good Samaritan in Kearney, Nebraska at the age of 76 years old. She lost her 8 ½ year battle with many health issues. She was... View Obituary & Service Information

The family of Norma J. (Lurz) Waits created this Life Tributes page to make it easy to share your memories.